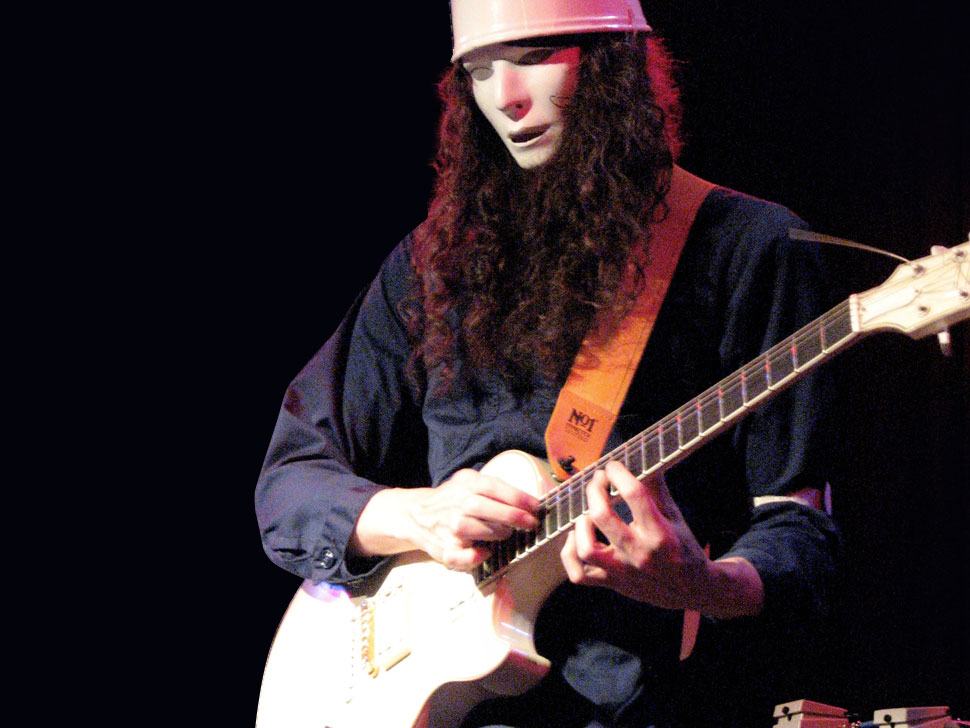 The enigmatic guitarist known only as Buckethead has captured the imagination of fans and musicians alike. But who is this masked man? And why is he wearing a chicken bucket? We may never know.

Throughout history there have always been artists who chose to remain out of the limelight preferring to let their art speak for itself. And then there are artists who create a stage persona–much like KISS famously did in their early days.

And so, in the case of Buckethead, if you find yourself asking why the bucket?—well, it's best to forget about it and just focus on the music. Which is, in a word: stellar. 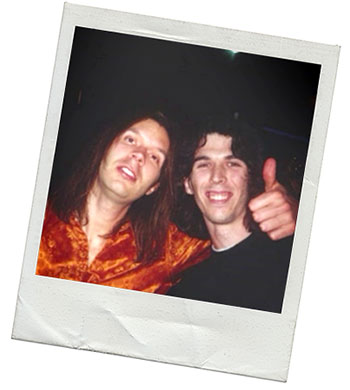 Is this Buckethead unmasked (right) next to Paul Gilbert?

Allegedly Buckethead's real name is Brian Carroll and he is said to have had guitar lessons from Paul Gilbert. In fact, Paul Gilbert himself on occasion has had to deny fervent fanboy speculation that he is Buckethead (hint: no, he isn't).

Pictures of him without his signature mask and KFC bucket tend to disappear from the internet quickly only to pop up in some obscure guitar forum elsewhere. Over the years it's been a bit of a party game for truly devoted fans to try and figure out who he really is.

Again, it's best to just focus on the music.

Speaking of the music...

The boy who would become Buckethead began playing guitar at age twelve and soon entered various guitar contests. One particular demo caught the ear of Guitar Player magazine editor Jas Obrecht, who took the young shredder under his wing and encouraged him to keep at it.

Not to suck too much wind out of the mythology, but the chicken bucket and mask are said to have originated as a creative solution to the young player's shyness when performing—no doubt a culmination of a fried chicken binge and dose of inspiration from the Halloween horror movies. It's since taken on a life of it's own and a backstory for the Buckethead persona has evolved over time.

Buckethead is very much a disciple of the Eddie Van Halen school of modern rock guitar technique, easily mentioned in the same circles as Paul Gilbert and Steve Vai as a player who has taken that language and run with it. Yes, he can play fast. Really fast. But he can also be tasteful and his style encompasses everything from neo-classical to funk, heavy metal and other-worldly ambient soundscapes. The latter has helped land Buckethead's music on some big sci-fi movie soundtracks.

Buckethead has been prolific, releasing more than sixty studio albums since his debut release of Bucketheadland on John Zorn's Avant record label in 1992.

When you hang in the circles of people like Bill Laswell and Les Claypool, your street cred goes way up. These are high-caliber musicians who eschew the typical in favor of music that is always surprising.

Buckethead has played with a lot of musicians over the years, and these days he is a frequent collaborator of Viggo Mortensen (yes, that Viggo Mortensen). But his most famous association has got to be his brief stint as reluctant sideman in Axl Rose's post-millennial Guns 'N Roses train-wreck, er, reboot, for the album Chinese Democracy–an album that, if nothing else, holds the distinction of being the most expensive album ever produced, and is proof that Axl Rose is a lot more of a mystery than Buckethead will ever be.

The best takeaway from the legend of Buckethead is this: if you work really hard and pursue your dreams, you will ultimately earn the right to wear whatever crazy costume you damn well please. For, Buckethead is a tour de force on the guitar and an innovative artist. And if, one day, he should decide to lose the mask and show his face, it'll still be just about the music.

Buckethead has a whole slew of Gibson and Jackson guitars, notably a 1959 Gibson Les Paul customized with all white hardware, a killswitch, uncovered DiMarzio Tone Zone (Neck) and Air Norton (Bridge) pickups–No doubt the basis for his signature Les Paul model. He also has a custom oversized Jackson Y2KV to accomodate his complaint that most guitars look like toys in his hands (he's quite tall after all). And for acoustic he favors a Gibson Chet Atkins.

For someone that wears a fast food container on his head he sure has good taste in guitars.