In Defense Of Smooth Jazz 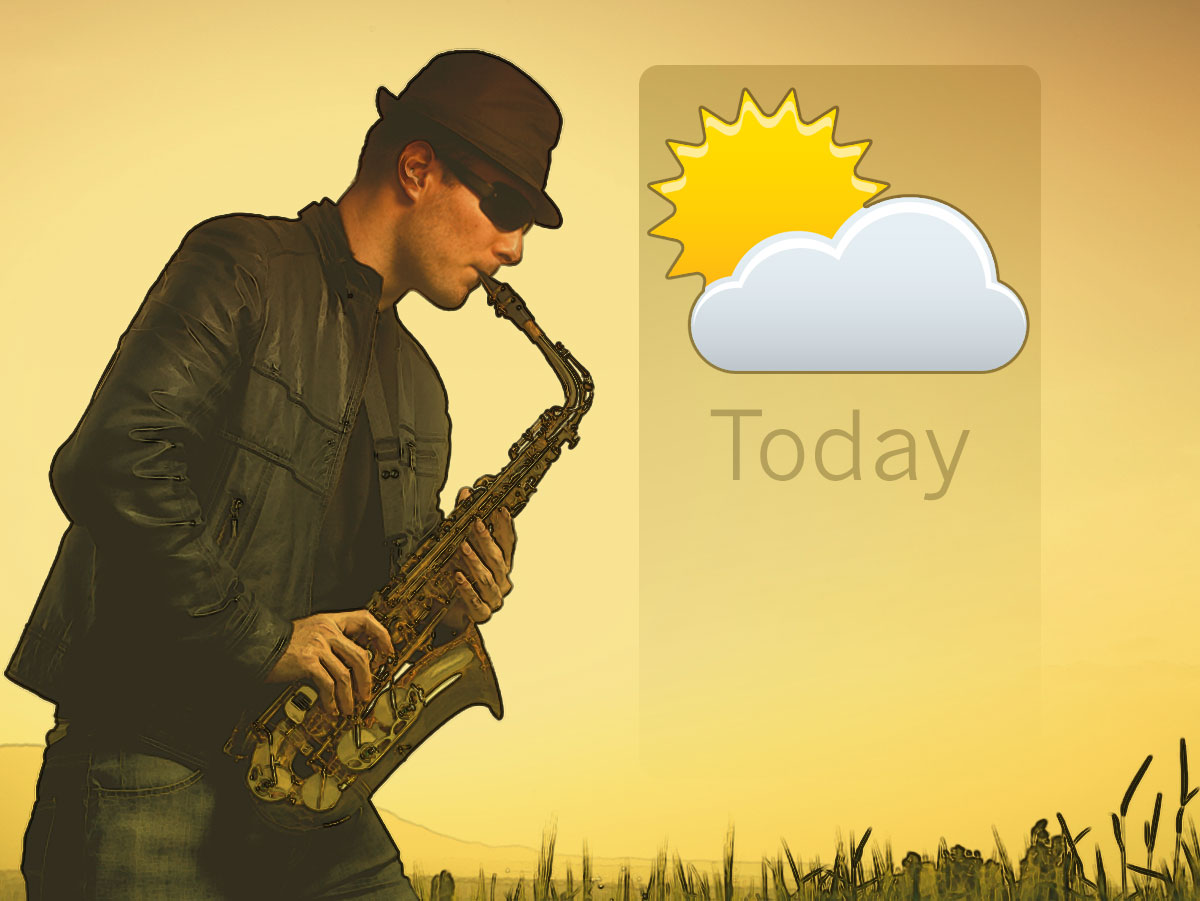 Not all Smooth Jazz is created equal. For every annoying jazz-blather forced on your unsuspecting ears at the doctor's office, there's a catalog of brilliant new music that just happens to fall under the same unfair name.

God forbid my sardonic friend Jami McGraw deigns to come within 10 feet of me while any sort of instrumental, non-classical, post-modern, post-fusion, post-bop—I hesitate to utter the word "smooth"—music is dancing forth from my delightfully accurate Bose speakers.

"What, are you watching the Weather Channel?" he'll snidely remark. And then, in a mock-weather-channel, adult-contemporary-voiceover kind of tone, he'll pepper me with faux meteorological updates. "Expect sunshine and the occasional cloud in Belvedere, Wisconsin tomorrow...". "Your 5 day forecast, brought to you by Binkerton Chrysler, is...

There was a drummer in Philadelphia named Tom Walling. He and I were attached at the hip for many years as a bass player/drummer combination that would sleep around with any guitar, tenor sax or piano player with fifty bucks and a gig.

It was Tom who first introduced me to the phrase "guitar hoagie". If you ever lived in Philly you know that a hoagie is philadelphian for a hero—or any other euphemism for a long roll filled with cold cuts, lettuce, tomato and mayo). 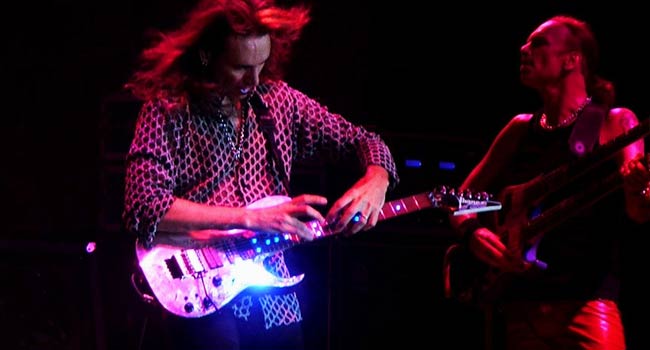 Original guitar hoagie Steve Vai on stage with one of history's greatest bass hoagies, Billy Sheehan. A true guitar hoagie often has both hands on the fretboard.

It was Tom's turn of phrase that finally gave title to the type of musician I idolized when I fell in love for the first time. I, at the tender age of 16, gave my heart willingly to the bass guitar and never looked back. But for some reason, instead of gravitating towards Paul McCartney and the bass player from Aerosmith who's name no one ever bothers to learn (it's Tom Hamilton), I became obsessed with what I suppose should be described as bass hoagies. Names like Stu Hamm and Randy Coven come to mind.

They would weave beautiful melodies with technique far beyond my reach. They would release album after album of music that no one but me would ever want to listen to; instrumental odes to the instrument I held most dear, filled with slapping, tapping, artificial harmonics and lush major-9 harmonies. Going back to listen to these recordings, your average layman could be forgiven for describing them as the precursor to what we now know as smooth jazz.

Whether or not the names Gerald Veasley and Pat Metheny ring a bell, you've no doubt heard their music. It would likely have been the day you chipped a tooth and booked an emergency session with your dentist. You were sitting in the waiting room hoping he could fit you in quickly so you could go back and continue eating the Skittles that wrecked your chompers in the first place. And as you were thumbing through a dog-eared copy of Time from July 1993, a trace of melodic guitar or soprano sax wafted by like the scent of bacon through the window of a trashy diner.

Gerald makes smooth jazz. He does it on purpose.

It held your attention for exactly 13 nanoseconds after which you no doubt flipped the page in US Weekly and went back to studiosly ignoring Gerald or Pat as they leaked out of the old speakers in the ceiling like melted asbestos.

That, my friends, is smooth jazz.

Gerald Veasley is a world renown bass player with whom I studied at University of the Arts. Gerald makes smooth jazz. He does it on purpose.

And, if you have the good fortune to come across some of his music—and if you take a moment to pay attention to it despite it being foisted upon you as musical sorbet to keep you calm amidst the sounds of teeth being drilled—you'll notice that it is incredibly well constructed. Every note is thoughtfully placed, every motif classically developed, every instrument mixed to create a harmonious timbre. It is, in a word, good. 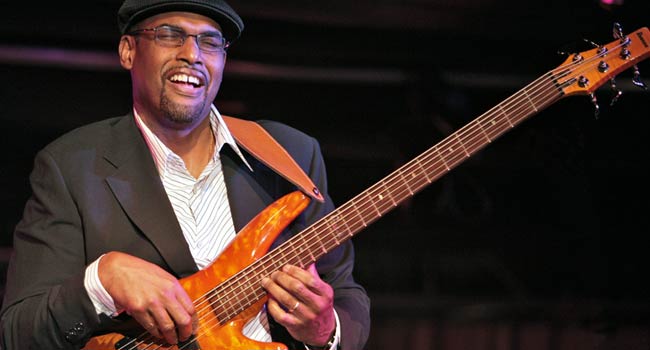 You'll find the same results after inspecting Pat Metheny, arguably one of the greatest guitarists of our time. My point is, neither of these guys are Kenny G. They are wonderful artists who deserve to be lauded above most others. They simply make a kind of music that, when turned down low and filtered through the speakers in a Whole Foods, tends to be innocuous and calming. It's not their fault.

The good, the bad
and the utterly forgettable.

Don't get me wrong, there's a lot of terrible music out there. The fact is, as soon as the era of Bebop gave way to Fusion, Jazz began its inexorable crawl toward muzak. And, while in the 70's and 80's, Weather Report, Return to Forever and The Brecker Brothers made some of the most badass, coke-snorting, rock-your-ass-off modern jazz fusion ever recorded, it was inevitable that the more melodious of these compositions would eventually find their way into cubicle farms and old people homes. 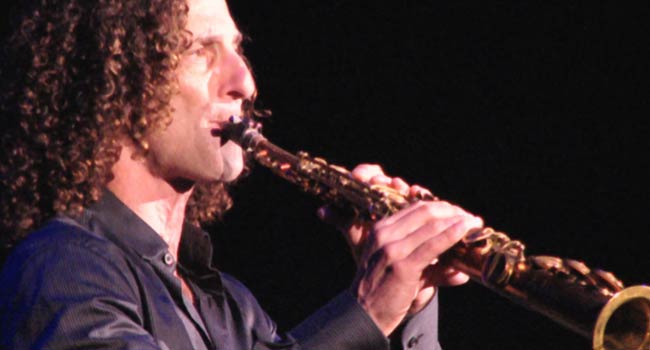 All the way to the bank.

Quick: name the 25th highest selling artist in America (48 million albums). Yup. It's Kenneth Bruce Gorelick. But you can call him Kenny.

It's safe to assume there are a thousand times more people in the world who associate Jazz with a skinny Jewish kid from Seattle than there are people who could pick John Coltrane out of a police lineup. But while Jazz aficionados and snobs alike may bristle at Kenny G's success, it's also safe to assume that he earned it the old fashioned way. By working his ass off.

Kenny G, now a semi-professional golfer and morning radio DJ in Orlando, has been there and done that a million times over. From his first gig with Barry White, the world's most recognizable soprano sax player found his way into studios and onto stages with a staggering array of stars including Whitney Houston, Weezer, Steve Miller, Aretha Franklin, Bebel Giberto and—wait for it—DJ Jazzy Jeff & The Fresh Prince.

He is wealthy, he is famous and his songs are beyond famous in China where they play his recording of 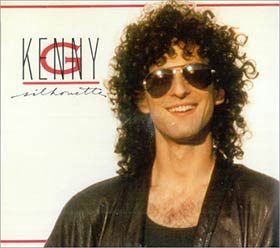 Going Home at the end of class in schools or when a public place closes for the night.

So, say what you want about Kenny and that scene in Pretty Woman when Julia Roberts ends up naked on a chair blasting Songbird in Richard Gear's penthouse, the man knows how to make music and do business.

Wait. It gets better.

Using a technique called circular breathing, Kenny G found his way into the Guiness Book Of World Records for the longest note ever played on a saxophone. Yes, the man held an E-flat for forty-five minutes and forty-seven seconds. Beat that.

This, in turn, produced revenue. And that, in turn, produced an army of crappy musicians whose sole purpose was to produce mountains of the worst vanilla, invisible and disturbingly pointless music the world has ever known, simply to make a buck in the last mass-market venue available to the real jazz musicians of yore: the smooth jazz radio station.

It's here to stay.

No matter what Jami says, no matter how close I come to killing him for talking down about Pandora's decision to play Marcus Miller's awesome rendition of Goodbye Pork Pie Hat, I know that he, like so many others, detects the scent of smoothness wafting from my speakers and makes an unfair judgement about the quality of the book merely by the sound of its cover.

It's what we have left. Miles is gone. Satchmo is gone. Coltrane is gone.

To be honest, Jami is one hell of a musician himself. And I know that he just gives me a hard time for comedic value.

But no amount of his good-natured ball busting will ever change the fact that smooth jazz, when done well, is the evolutionary detritus left after the implosion of an art form propagated by all those amazing musicians from Bix Beiderbecke to Louis Armstrong to Miles Davis to Chick Corea.

It's what we have left. Miles is gone. Satchmo is gone. Coltrane is gone. We can listen to their old recordings over and over again, but I think it's safe to assume they're not making any new ones.

So, when you find yourself in the mood for a little culture, when you desire the taste of music performed by those who put aside all aspects of a normal life to practice their instrument 12 hours a day for years on end, when you suddenly think to yourself that man cannot live by Beyonce alone, try flipping to the smooth jazz channel and listen for the gems amongst the flotsam. They're in there if you search for them.