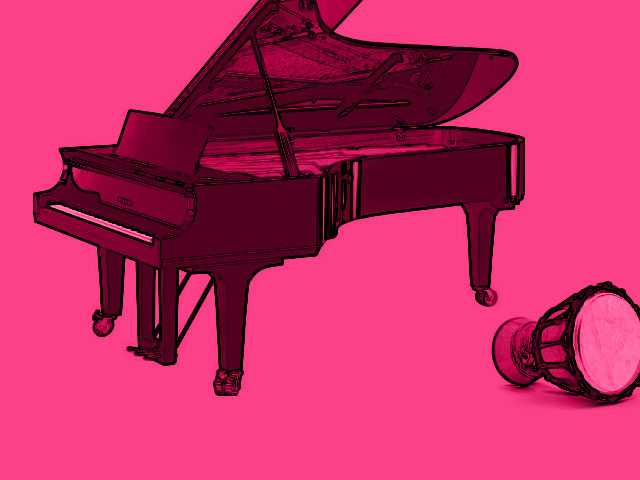 There are a million theories about how to treat pianos and percussion in the studio. Here are some basics to get the ball rolling.

There are endless ways to mic pianos and endless ways a piano can sound. Grand, baby grand, upright, spinet. Know what you want for an end result before mic'ing! I’ve mic’d a baby grand but mic’d and processed to get a more honky tonk sound – depends on what you have and what you need.

A few ways to mic a piano.

The first would be an X/Y mic'ing (take a look at X/Y mic'ing in Mic’ing Drums, Part 3: Overheads and Kick Drum to learn how) with the mic’s placed center and over the hammers.

Another method is larger diaphragm condensers placed on the side and looking over the edge of the piano, one at the top of the bend looking towards the hammers and the other at the bottom of the bend of the piano. You can also take large diaphragm condensers and have each looking straight down and about a foot off the strings, one placed towards the hammers focusing on the higher strings and then the other mic place midway down the piano and focusing on the lower strings.

You can add in room mics (X/Y or wide placement) placed in the preferred position for maximum room but still having clarity. I’ve also used one ribbon mic on a baby grand sitting on top and to the front of the piano and looking down towards the hammers. This is a cool rock sound especially when you’ve compressed the living crap out of it.

Piano’s have a large dynamic range so be careful to not give the mic pre too much gain or you’ll peg it on the heavy hits.

And a few ways to mix.

To mix it, you can either pan hard left/right or less so. I’ll often send the two mics to a stereo bus/group and compress and EQ from there. A light touch to maximum warp just depends on what you want. Try a fairly slow attack and fairly quick release with a moderate ratio as a compression starting point.

When you EQ try to reduce sub low rumble and give it some air on top. The 2 to 3k range is important—you want attack but you don’t want the audience to feel assaulted (most of the time).

Percussion and other things you bang on.

Most percussion instruments need some room. Skinned instruments need less room unless you want that tone. Shakers and tambourines need some distance from the mic and better that the hits (the most forward motion of a shaker, for example) are not aimed at the mic.

Often with these two instruments I’ll have the player stand 2 to 3 feet off the mic and play them sideways to the mic. Never have a shaker played into a mic like a knife in a bad 3D movie – no forward hit straight into the mic!

With skinned percussion I prefer a large diaphragm condenser mic set off the head 5 or 6 inches. But lots of times I find one foot away with the mic looking over the front edge of the head works best. With big low end percussion drums, get further off them with the mic.

When I mix percussion instruments generally I compress and then roll off everything under 75Hz up to 250Hz depending. I also boost the whole spectrum starting anywhere between 2 to 6k. You’ll want a nice top without it being like a random punch thrown at your mix and not a lot of low end to clutter.