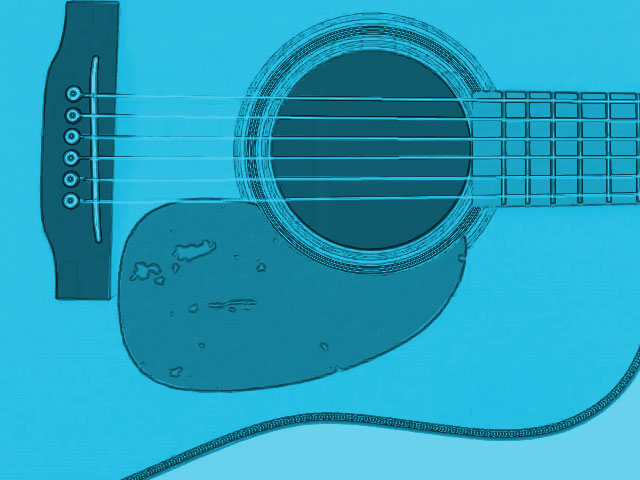 Whether you’re recording the next Dave Matthews, Bela Fleck or Andres Segovia, getting the right sound from an acoustic guitar will make your mix come together perfectly.

A mic positioned at the 12th fret, six inches from the neck and looking down the fretboard towards the sound hole is the most standard way of mic'ing. I also use an additional mic about a foot out, directly in front of the sound hole and then flip the phase on this mic. You can also position a ribbon mic at this position or even have it looking down over the shoulder of the player. Or, you could also place a second mic two feet in front from the back edge the guitar looking at the bridge of the guitar.

I’ve also used two pencil condenser mics—one on either side of the sound hole—about a foot off the sound hole and a foot apart. Start with the mics parallel to the instrument and looking in at each other. Now turn each mic towards the guitar about 20 degrees. In this method you’re using phasing as your friend.

Small movements of the mic in all these methods make a big difference and can take a sound from awful to bliss and vice versa. If you must, record the DI (direct input) if the instrument has it. Sometimes, especially live or in a room with other instruments, it’s necessary, but usually there’s as much soul and vibe to them as a piece of particle board (sometimes less). If perfect isn’t an option then getting the job done is.

When I mix I usually have the sound hole mic down -10 to -15 db from the mic over the fretboard. I’ll bus both mics to a mono bus/group and compress and EQ from there. I like a moderate to slow attack, a fairly quick release, and at a 4:1 ratio.

You can use these ideas for similar instruments such as a Lafta, Lute and other more exotic instruments as well.

The doughnut is key. Lots of the instrument’s tone comes from the resonating doughnut and also the F holes. I’ve used dynamic and condenser mics as well as combinations of the two. Start with a neck mic, as described above. Now take a dynamic mic and place it straight on and six inches to a foot away from the bottom F hole. You might find moving this mic directly center to the doughnut is also cool sounding.

Rooty and vibey are what you’re going for. It’s not an acoustic guitar, it’s its very own unique vibe and kinda small and nasally is a goal.

Same thing for EQ and Compression as outlined above for acoustic guitar, but I might focus and boost more at 1k instead of 3k

Each of these instruments are so dependent on the particular instruments tone that there is no hard and fast rule. You must listen to the instrument, know what you want from it, and mic accordingly.

My compression setting is very similar to an acoustic guitar, but I’ve also really leaned in and smashed them too – depends on what you want. For EQ, get rid of stuff below 75Hz and add some air (above 10k) and attack (1 to 6k). You might also need a little cut around 300Hz.