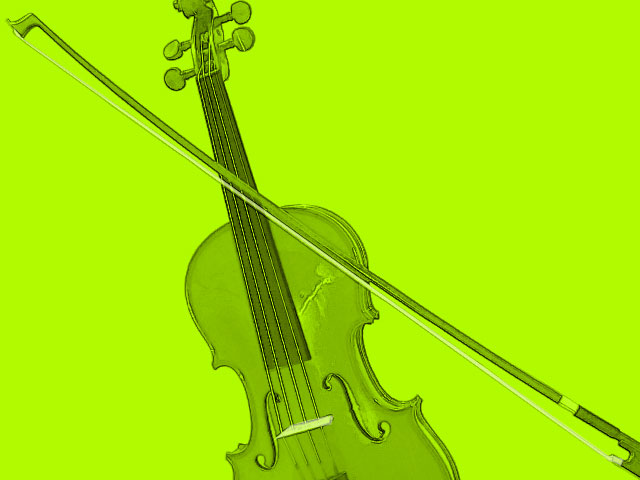 With something as in-your-face as violin and viola, it’s important to mic and mix your recordings just so. It’s all about the mic’ing, panning, EQing and mixing.

Air! Give it some room. No such thing as close mic'ing on a violin or viola, unless you’re going more for a fiddle sound. Violins are delicate things – the sound is generally small and can get abrasive quickly, especially with a less than proficient player. Viola’s are more robust but can have some trouble in certain frequencies.

Start with the right mic.

I usually only go with one mic. You can add a room mic but the primary mic is going to pick up a lot of room anyway. Go high. I use a pencil condenser at least 3 feet above and 4 feet in front, pointed towards the center of the violin or viola. If it’s too ambient for your taste, just move in a foot each way until you like what you hear.

Careful with the mix.

When I mix a violin/viola part, it starts with the compressor at a slow attack, slow release and moderate ratio - about 4:1. But let’s say I have an arrangement that consist of three violin lines and two viola lines, with each line being quadrupled. I’ll pan all 20 channels at their individual faders according to where I want them in the stereo image. I usually pan just as if I’m looking at an orchestra: Violin 1s quadrupled parts are panned in various degrees of fairly hard right. Violin 2 less hard right but still each quadrupled part with a different pan Violin 3 the same, but more towards center And viola’s occupying soft right, center and soft left. No right or wrong to this – it’s according to your taste.

I generally won’t EQ or compress the individual bus/groups, but this will allow you to control levels of a part using only one fader instead of three or four. Instead, I’ll compress and EQ on the Master String bus/group.

The only trouble with this method is that, if you’re really increasing a line at a certain time, then you are sending more into the master compressor, which means you’re hitting it harder and thus fighting it a little – but most times it’s a cool thing. If this does become a problem, just compress and EQ on each part’s individual bus/group and then send to a master bus/group which will be used only for overall level of the entire string section.

A word about EQ.

Be careful of taking out too much low end. A lot of body is in the 100 to 300Hz range. I will roll off everything below 75Hz and then dip a little out between 700Hz and 900Hz—and again cut at between 1k and 3k—all depending on the tone of the instrument you’ve recorded. Then I’ll lift, very subtly, above 6k. You don’t want woofy, you don’t want slicing abrasiveness, and you definitely don’t want whinny.

If I can, I’ll set up two reverbs, one a large room/hall/plate with a long decay, and another reverb that is smaller with a short decay. Then I’ll add both to my master string bus/group. Lush but not smeared is the goal. As a quick reference I use three different recordings as touchstone:

But you’ll find your own references. I recommend listening to them to keep them fresh in your head as you begin to mix your own strings.

Lots of times I use violin and/or viola to cut multiple parts and quadruple each line played, kind of building up to the equivalent of a chamber orchestra. Important: you must play back the parts the player has just played in their headset when they start to double . It’s important they hear the line they just recorded in order to match vibrato and expression.

Also, if you’re doubling/tripling/quadrupling a line, make sure that with each new pass the player moves from the spot they just recorded from, just a foot or so either way. This will make a huge difference and a much fuller, richer sound. Think of it like a violin section of the orchestra – they sit in chairs next to each other, not on top of each other (although that would be fun to see). You won’t have a different violin or different player’s hands for each pass, but you’ll at least have a slightly different timbre on each pass. It makes a difference.