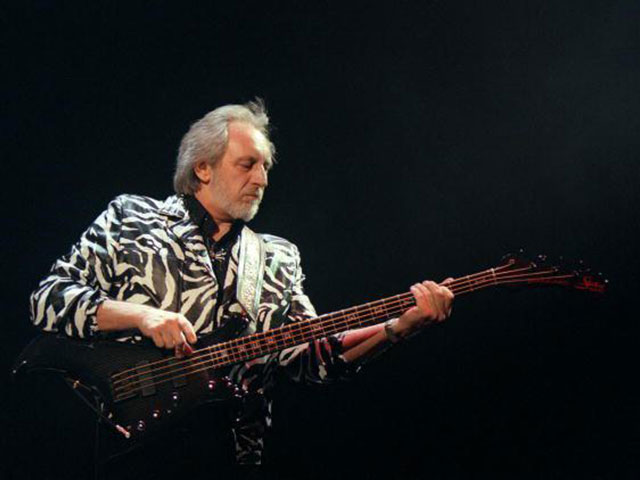 They called him The Ox. Throughout his life and times as part of seminal British rockers, The Who, John Entwistle brought bass to the forefront of rock.

One of the most influential bassists of all time was said to be the late John Entwistle, voted “Best Bassist Of The Millennium” in 2000 by Guitar Magazine.

Entwistle could certainly be heard on stage. Here was a reserved guy (nicknamed The Ox) who barely moved a muscle while performing. But his style was flashy and he played like a monster, his left hand moving with the fluency of a spider up and down the neck. The speed he obtained with his picking fingers was staggering.

The Who was a powerful band. Keith Moon played his drums with reckless abandon, never content to play anything simple or straight ahead. Pete Townsend would attack his guitar with studied intensity letting the chords ring out like church bells. But the one who really held it all together was John Entwistle. Solid as a rock. Full, consistent, melodic and rhythmic.

The Ox was not afraid to turn his volume up—way up. There are cases where he and singer Roger Daltrey would feud. Daltrey would yell, “turn it down!” Finally, Entwistle threw his bass on the ground and yelled back “you play the bloody thing.” Pete Townsend also mentioned in the John Entwistle movie, “An Ox’s Tale” how he felt continually upstaged by Entwistle’s bass rig—it always seemed to grow.

Entwistle’s collection featured nearly 100 instruments including his prized Fender P-Bass with maple neck (Frankenstein) and for years played Alembic basses. After having wiring issues with an Alembic, he stopped using those and helped design a John Entwistle signature model called the Buzzard Bass.

His vast collection of amps included names like HiWatt, Sun, Marshall, Hartke, Trace Elliot, and Ashdown. He never settled on a particular amp rig for long but obviously preferred the bright punchiness of 4x10 enclosures. One rig had a custom cigarette lighter built in!

So, how was Entwistle able to cut through the mayhem and be heard in the mix? The Ox did not favor the typical low, bottom end tone that so many other bassists at that time used.

Instead, he would turn his treble and mid tone controls to the max. He used Rotosound roundwound strings. And while he played bright sounding Alembic basses in the 1980’s, his earlier studio bass was a Fender P-Bass with a maple neck that provided a brighter tone. He had assembled the bass out of some destroyed basses and named it Frankenstein. That is the bass you’ll hear on most early Who recordings.

John would play a lot of open strings and octaves. In places where most bassists would play an open E—or an E at the 7th fret on the A string—he would play them both. He would also include the E on the G-string.

Or, if he was playing an A, he would often play it on the E-string, the open A, and the A on the D-string. He was able to lock with a groove by creating rhythms using only an A by playing the three A’s at the same time, or alternating the notes.

Also, John was probably the first bassist to implement his signature "typewriter tapping" method, which can be seen on the "Hot Licks Master Class With John Entwistle" video.