How To Make Your Own Distortion Pedal 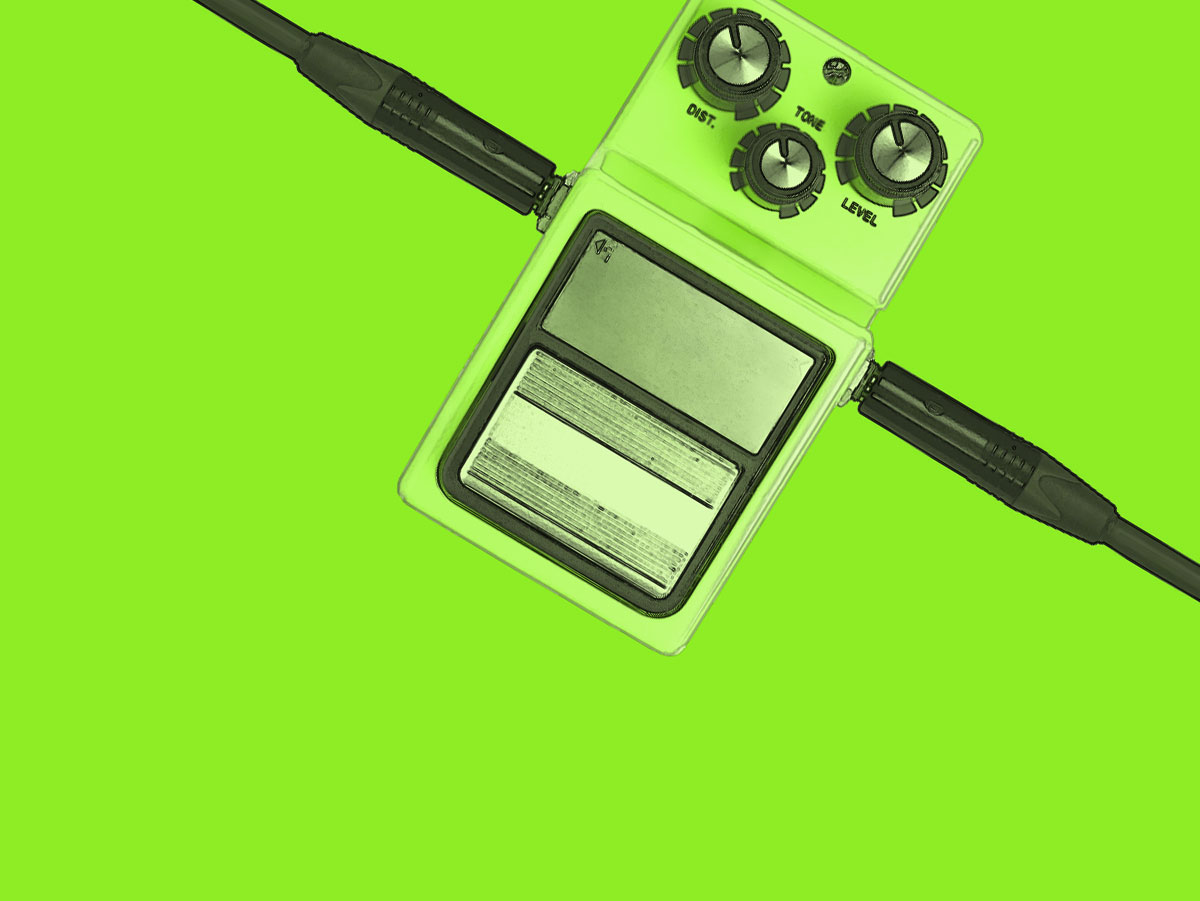 Sure, you can get a distortion pedal that comes close to the sound you hear in your head. Or for extra credit, you could construct your own light-saber and become a Jedi.

A brief history of distortion.

In the mid 50's, when electric guitars became popular, all amplifiers were designed for vocals, and they didn't really give the edge guitarists wanted. The only way to get distortion was to turn the volume to eleven and hope the tubes didn't melt (or the neighbors didn't call the cops).

Coming to the sixties, guitarists razored their speaker cones to make a fuzzy sound. Later, the first distortion effect boxes were made to simulate the sound of razored cones and overdriven amps. These days most amps have built-in distortion, but distortion effects are still popular. Now we're going to discuss the methods of creating distortion with effect boxes.

The types of distortion.

The ultimate distortion comes from tubes that are overdriven so that they create a smooth singing sound. Nothing can mimic tubes, although there are a million different "tube-sound distortions" available. Usually distortion effects use solid state circuitry like transistors, op-amps and diodes, but there are a few commercial tube overdrive effects available like the Red Hot Chili's Tubester or PAiA Stack In a Box Kit.

The most common distortion types.

Just like overdriving tubes, transistors are being overdriven by setting them to run at the top of the amplification range. This creates nasty, distorted tone.

Usually fuzzboxes use overdriven transistors. Check out different Fuzz Face-like designs to see what I mean. Different types of transistors distort differently. Silicon transistors make a nasty, metallic sound. Germaniums, which were used in the late sixties on the original Fuzz Face, have a little smoother sound. Unipolar transistors, such as jfets and mosfets have a softer, more tube-like tone.

This is a very common way to create distortion. Two diodes shunt to ground the opposite way around will cut away the peaks of the signal and thus create distortion. Check out MXR Distortion+ to see what I mean (just click the purple icon). 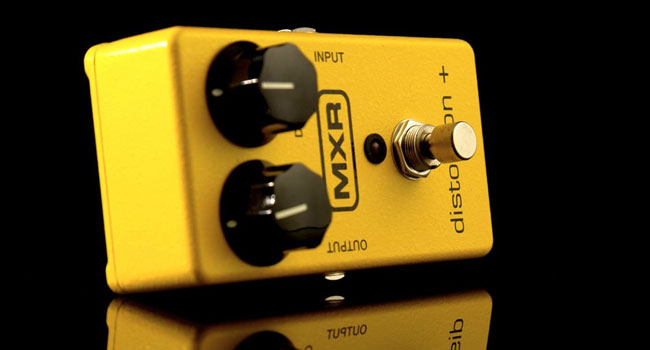 MXR Innovations came out with their MXR Distortion+ in the mid 1970s to critical acclaim. The picture of simplicity, this pedal sets itself apart with minimal circuitry and only two knobs. The control increases the amount of distortion while simultaneously cutting bass to improve clarity.

Effect could be improved with true bypass switching. 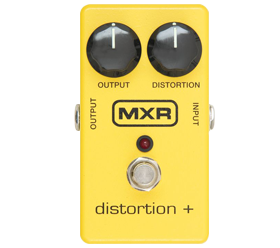 Another very common method, this creates a more overdrive-like sound than "hard" clipping distortions. Two diodes are connected on the feedback-path of an op-amp or a transistor. This rounds out the peaks of the signal and provides a tube-like tone. Ibanez Tube Screamer uses this method. 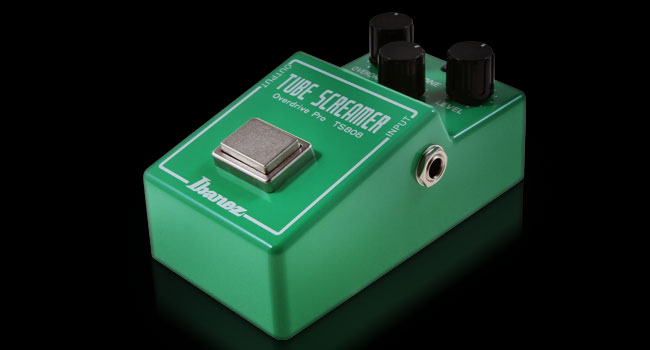 The Tube Screamer by Japanese guitar maker Ibanez has gone through many incarnations since its debut as the TS-808 in the 1970s. This distortion pedal is most popular with blues guitarists because of its mid-boosted tone, used to mimic the sound of a vintage tube amp. 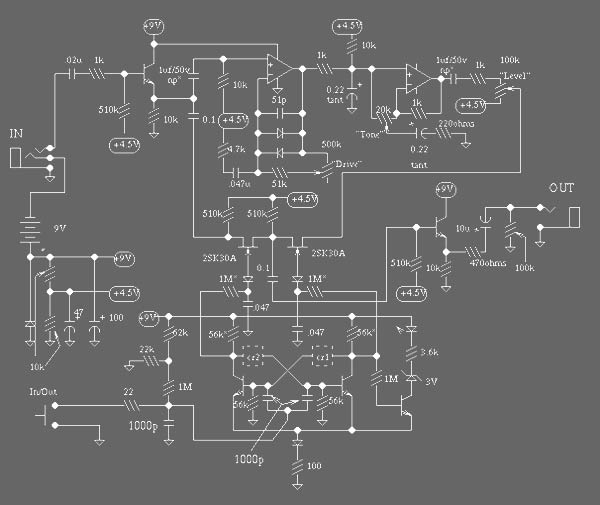 np* = non-polorized resistors denoted by * marked as 1M on original might be 22k and those marked 56K might 10k.

crf1 and cr2 are a special cap and resistor in parallel, the cap is 51p, the resistor is 56k. 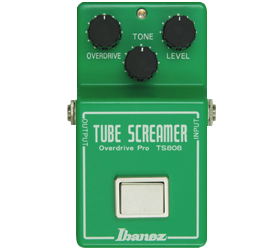 A thing or two about Op-amps.

Op-amps (or operational amplifiers) are probably the most common component in creating distortion. To know a few op-amp basics won't hurt when designing distortion effects:

Op-amps can be configured to three different kind of stages:

The differential is very rare in distortion designs. It really doesn't have any advantages and is the most complicated, so we'll skip it.

A non-inverting preamp is a circuit where the input is connected to the non-inverting (+) input of the op-amp and a feedback loop is between the inverted input (-) and the output.

The gain of an inverting op-amp is set with resistors R1 and R2. The gain equals R1/R2. To avoid tone-loss, guitar amps and effects should have an input impedance of more than 100k ohms. And so, the input resistor R2 should be at least 100k. That means to have a gain of 10, R1 would have to be 1M or greater. Unfortunately, high resistor values mean high noise. 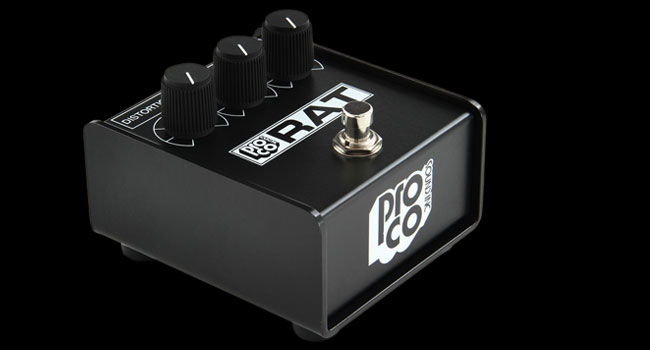 ProCo engineers Scott Burnham and Steve Kiraly designed The Rat while repairing Fuzz Face distortion pedals. They felt they could build a better mousetrap. Since then countless guitarists have relied on variations of the original. RAT's variable gain circuit distortion is similar to the classic Boss DS-1 distortion. 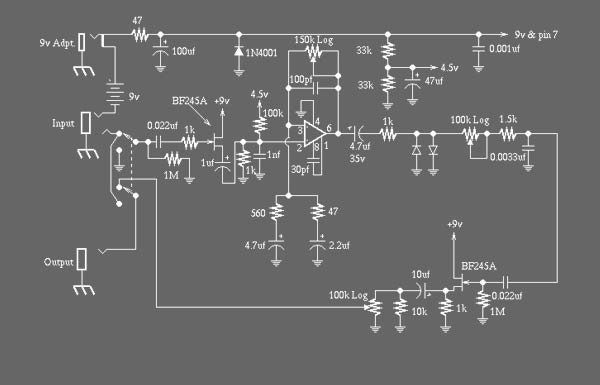 Production of the RAT2 using a new PCB began in 1987, but the small box RAT continued to be produced. Many of these late issue small box black-face RATs were made with the new RAT2 PCB. These RATs often implement the RAT2 circuit minus the indicator LED bypass circuitry. They include R12 and R15 and have RAT2 values for R4 and possibly C13. 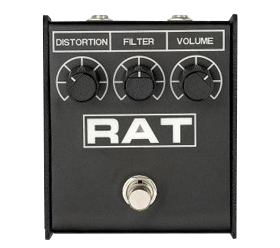 To function properly, an effect has to have filters to reduce the frequencies being amplified. Filters will roll off the frequencies we don't. want to amplify. These are the high radio frequencies and the low noise frequencies. A simple (or first degree) filter is formed by a resistor and a capacitor shunt to ground. A high pass filter allows frequencies higher than the limit frequency to pass and lower frequencies are rolled off. A low pass filter is just the opposite.

Calculating the limit frequency is based on this formula:

Good limit frequency values could be 40Hz - 30,000Hz (30kHz). You might want to alter the low limit frequency, if your guitar is tuned down and using heavy-gauge strings (i.e., .013's) or designing the effect for bass guitar. You should not go under 20Hz because that's the lowest audible frequency.

Calculating the value of C1 works on the same formula like this: 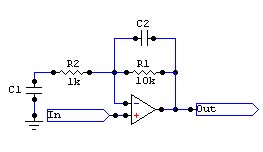 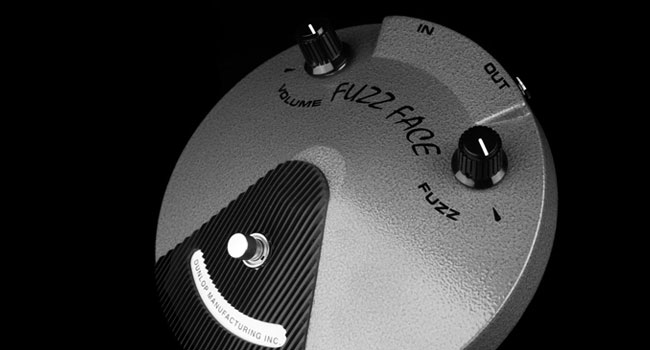 Arbiter Electronics introduced the Fuzz Face to the world in 1966. After achieving fame as Jimi Hendrix's go-to distortion pedal, the design was handed to a succession of companies ending with it's current owner, Dunlop, in 1993. 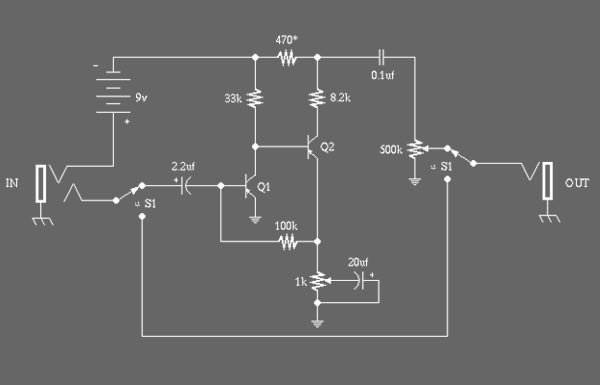 There are apparently two similar versions of the fuzz face. In one Q1 and Q2 were PNP germanium AC128 or NKT275 types. In the other, they were NPN silicon BC108C types.

Which type you choose to build will influence some of the other components. For a PNP version, the schematic is as shown. But if you build the NPN version, then the 470 ohm resistor marked by a * must be changed to 330 ohms and the battery and all the polarized capacitors must be reversed.

The original schematic is not exactly what is shown above. It had a very complex switching system which has been simplified (nothing has been lost, don't worry), and a unique grounding setup.

Aside from that, the schematic is exact with minor differences in components 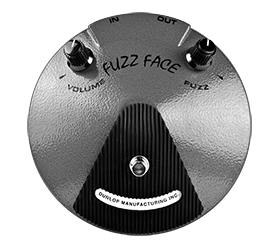 on various units (eg. some had the 01uf cap listed as .047uf, which shouldn't make a difference as long as you feed a high impedance amp.

The transistors are hard to find. The thing to look for is germanium transistors with a decent gain factor (gain > 80). Note: silicon transistors will clip harshly and may not sound good, though 2n3905 has been said to work.

Supplying power to op-amps isn't as simple as you could think. It isn't enough to connect a 9-volt battery to the V+ and V- pins on the op-amp, but an op-amp needs to be connected to a bipolar power supply or it needs to be biased to half of the input voltage.

The two battery power supply is very rare with stompboxes, and the bipolar supply is also rarely used, but more common with small practice amp designs. Both of these can be used to power up your opamp if you don't want to use biasing (described later).

Biasing is a common way to power up the op-amp while using unipolar supplies such as batteries or wall warts. Biasing is made by connecting two resistors from +9V to ground to half the voltage.

The above circuits are simple op-amp biasing circuits. They have two resistors connected from the battery + connector to ground and a capacitor to reduce hum. You can find this kind of biasing in almost every distortion effects. To mention a few, Ibanez Tube Screamer, MXR Distortion+ and ProCo Rat.

There are so many op-amp types on the market that choosing the right one isn't that simple. However, experimenting with op-amps isn't that difficult. 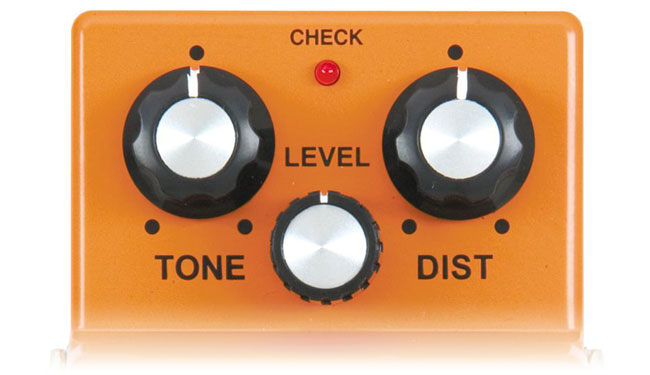 The above circuits use two different ways to control the amount of distortion. The first one is a volume control before the op-amp. This limits the amount of signal going into the circuit. The second one replaces the drive setting resistor of the op-amp. Turning the pot alters the gain of the op-amp. Note that this also changes the roll-off frequency of the high-pass filter around the op-amp. 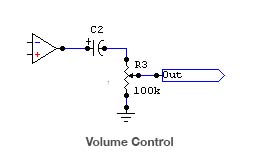 The above is a volume control circuit. This is almost the same on all distortion designs. The capacitor is protecting your amp from DC coming out of the op-amp. Note that this works as a tone control also, so I recommend using a capacitor value large enough that it doesn't affect the tone. 10µF should do it.

These two circuits represent different tone control circuits. The first one is a very common tone circuit. It is a variable low-pass filter. You can count a good capacitor value the same way we counted the low-pass filters earlier. A good pot value would be something from 100k to 500k.

The second one is a more complicated circuit, originally from a circuit called Big Muff. It has a low-pass (R1 and C1) and a high-pass (R2 and C2) filter and a linear pot (R3) that is used to control the filters. When you need just a little tone tweaking, use the simple tone control. If you need a versatile tone control that can sweep through the whole tone range, use the Big Muff.

Choosing the clipping diodes of your distortion can be the most fun part of the designing process. Clipping diodes are like ice cream. Some like strawberry and some prefer chocolate. 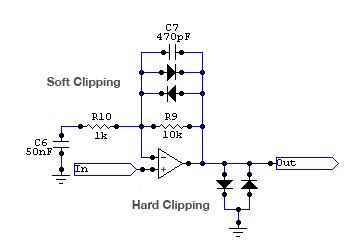 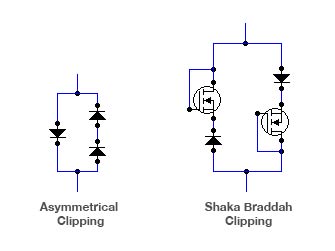 Above you can see special clipping diodes. The first has a single diode on one side and two on the other. This cuts down the positive or negative peaks (depending on how you connected the diodes) more than the other side.

The second one is from Jack A. Orman and Aaron Nelson's Shaka Braddah III design. It uses a diode and a MOSFET to create clipping. It gives a nice, bluesy soft clipping. The original diodes were 1N34's and the MOSFETs were IRF520's. When you've studied the basics of op-amps and diode clipping you can build your own designs.

Reprinted by permission of GeneralGuitarGadgets.com.