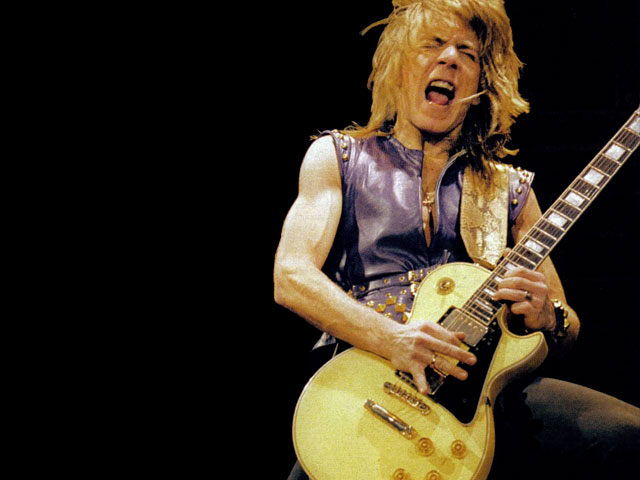 Randy Rhoads brought an unmistakable mix of power and elegance to the guitar in his few short years as Ozzy Osbourne's guitarist and collaborator.

Randy Rhoads started playing guitar at the age of 6, and in high school founded the hard rock band Quiet Riot. He recorded two albums with them for CBS SONY Japan.

In 1979, it was suggested he try out for former Black Sabbath frontman Ozzy Osbourne who was forming a new band. Not a big fan of Sabbath, Rhoads took some prodding to even audition. But after just a few riffs was in the band and quickly became the driving force in Ozzy's most creative songwriting period.

A fervent student of classical guitar, Rhoads frequently sought out tutors while on the road and even spoke of taking a hiatus to get a classical degree. And while classical music is often an influence in Heavy Metal music to create a foreboding quality, Randy’s music was always very positive. And his soaring solos were, dare I say, even joyful at times. There’s no better example of this than on the Randy Rhoads Tribute album which features live concert recordings of Randy’s playing at the top of his abilities.

While he recorded only two albums with Ozzy before his tragic death in a plane crash in 1982, his dedication to guitar and tasteful display of virtuosity continues to inspire new generations of musicians.

Randy Rhoads was a big fan of MXR pedals. Namely the Distortion+, Stereo Chorus and Flanger.

For his amp, it’s a cranked Marshall all the way. His cabinet was loaded with Altec speakers.

You will, of course, want distortion, chorus, and flanger effects, and a cranked-amp with treble and mids at the halfway point and bass rolled off a good bit. Randy pushed that even further with the aid of a MXR 10-band EQ. His more traditional classical parts tended to be drenched in a chorus effect - especially live.

One signature trick he liked to use in solos was to create a “stutter” effect by quickly toggling between the bridge and neck pickups on his Les Paul. His sound mostly stems from his ability to infuse ballsy blues-rock with long, fluid classical passages which will require practice to bring up to speed and precision.

Reportedly in the studio he would often double and triple his guitar parts for a much fuller sound.