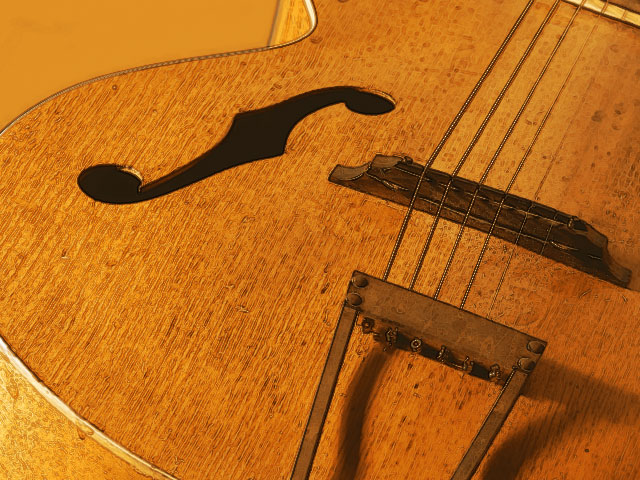 Part 2 in this series covers the basics of guitar equalization in the studio.

Guitars are one of those many instruments where you really don't want to do a lot of heavy EQing to make them sound beautiful. Unless of course your goal is a heavily processed sound (which I won't cover here), it's best to think about your mic selection and placement before you start EQing the hell out of it (until invariably doesn't sound like a guitar at all).

Both acoustic and electric guitars, obviously, are approached differently. For acoustics, it is common place to just throw a large diaphragm condenser mic 6-12 inches from the sound hole and be done with it, but before you do, think about this. While the sound hole does produce the most amplitude, and theoretically is supposed to produce a more complete sound frequency-wise (or so say the manufacturers), do not ignore other areas of the guitar that may give you sounds that may surprise you. Behind the strap peg at the base of the body and the neck are two sneaky areas where you may get elements of the guitar's sound, or the player's technique, that will give your sound a richness not always associated with a mic simply focused on the sound hole. This will often give you a natural EQ, where a couple mics combined could round out your sound with very minimal plugin necessity.

On electrics, there's an even larger number of issues to pay attention to. Where as different types of guitars produce varying sounds, and body construction, string size and type, shape, and body type (solid, hollow, semi-hollow, etc.) play a huge role in their sound, the amplifier you are using (assuming you aren't going direct through an amp modeler or similar device) plays a similar huge role. Determining your sound depends on several factors, and several of those factors are going to be determined on personal preference. A lot of things may surprise you along the way. Spend a little time thinking about mics. While a common scenario is jamming an SM-57 right in front of the speaker cone (parallel to the screen) is common, think about different angles you can record the sound from. Even the slightest turn of the mic in relation to the sound output can reduce bass by 50% or more and open up some higher frequencies you were missing. This simple procedure, in addition to your mic selection and distance in relation to the sound and the room, can be all the EQ you may need.

While I could spend many articles writing about getting guitar sounds, a key thing to always note is: you need always start with good sounds for mix-EQ to be effective. By limiting the problems you may run into with instrument issues (string buzzing, ground hum, etc.), you can limit your need to use EQ heavily as a solution to a problem, and more of as an spectral enhancer. And moreover, it will save you from the long nights you will have awarded yourself by suggesting to "fix it in the mix".