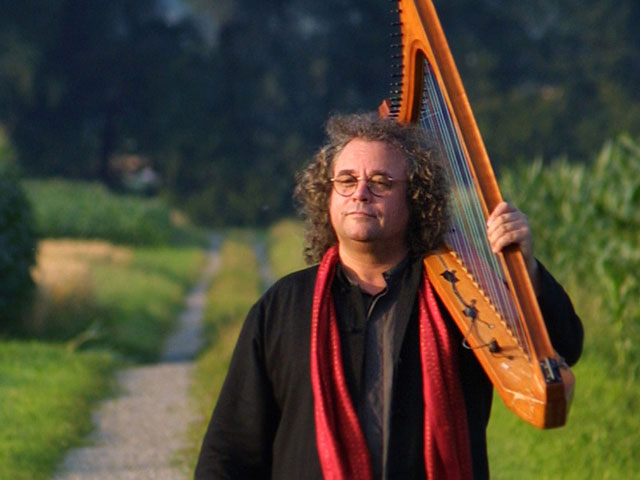 New age, world music, jazz and classical come together in the hands of this virtuoso harpist, known around the world as AV.

Ahhh. There is nothing else like the soothing sound of a harp. For centuries, harps have been synonymous with angels and heaven. One of the few players to fuse the harp with various styles of music is Switzerland’s Andreas Vollenweider (AV). Perhaps better known around the world than in the US, Andreas has been making and producing magical music now for over 34 years, making his debut in 1979. His music is classified as new age, jazz, fusion, world-music, classical, and probably everything in between.

People often wonder how AV has such a broad, “world music” sound. He tells the story about his youth, and about his next door neighbor in Switzerland. She would supervise AV quite a lot, and she was a hoarder of all sorts of interesting treasures she amassed while travelling the world. She would play make believe with him, they would dress up, and they would experience different cultural treasures this way. AV was taken on many journeys and adventures around the world—without him ever having to leave the house! This helped instill in him a world, multicultural sound with his music.

Like a gardener who tills the soil, plants the seeds, then waits patiently for the end result, AV does not like to force his music. He prefers to let it happen on its own, and has taken some long hiatuses in between. He says the harp is an easy instrument to play and make sound good; but it is a difficult instrument to read music with, and to play “properly.”

His approach is to get a flow going with his melodies and the rest will follow. He often tells the story of a trip to Africa where he met a musician (I forget which unique instrument he was playing), and went on about the player’s sound and how the guy got a flow going, and seemed to be “someplace else.” This rather formless, melodic style, invites a form of meditation—for both AV and his listeners.

Luckily, I’ve had the opportunity to see AV live on several occasions over the years. Every tour, his band is unique, and the instrumentation is different. He prefers to keep everything fresh, and every band he puts together is impressive. It seems that all of his musicians are virtuosos, as they seamlessly migrate back and forth to unique instruments the entire gig. And they clearly understand the impact of proper tone, dynamics, and space in music. Only those who’ve attended a live AV concert can truly understand how this unique music touches the soul.