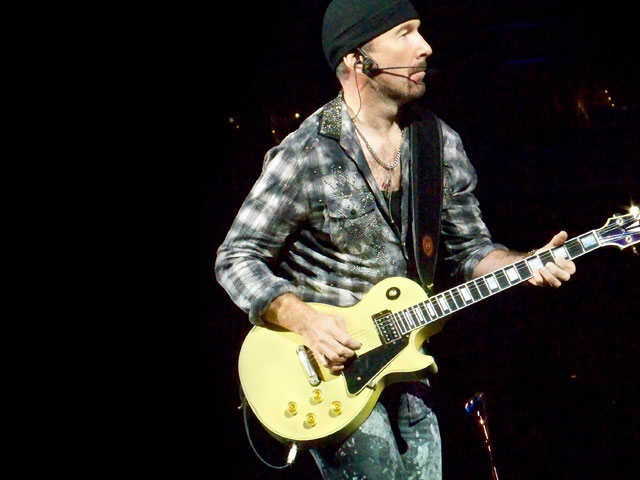 Fully embracing the electric guitar and modern effects as his palette, U2's The Edge has added distinct, tasteful and unexpected textures to the language of rock guitar.

Born David Evans, Edge brings a level of restraint to guitar playing that, to many players, would in itself prove challenging. Much like artist Piet Mondrian and the De Stijl movement where art was brought back to basic primary colors and grids, Edge prefers to re-invent from inside the box; or better yet, question if there ever really was a box. It is with this less-is-more philosophy that Edge has propelled his band, U2, on a course to be among the greatest rock bands in history.

His unmistakable shimmering guitar tone and metronomic timing wash over U2’s songs in waves, coming more into focus as each crest of sound hits your ears. This is a deliberate and conscious effort by Edge to pull you, the listener, in and transport you to the time and place that singer Bono is passionately wailing about. A great example is the classic song Pride (In The Name Of Love). You get the melancholy feeling the song’s subject clearly invokes, but also a sense of hope. This is masterful songwriting, and the music is truly in support of its message.

Edge’s sound very much relies on walls of reverb and delay. Many of his syncopated rhythms would be at home in dance music if it weren’t so grounded by the driving rock attitude of the whole band. The Edge’s steadfast search for the heart of a song’s true essence–and to play only what music will truly transport you there–is what makes his guitar playing so magical.

For Edge’s classic gear combo, it’s VOX AC30 amp, Gibson Explorer guitar, and a slew of pedals for delay, compressor sustainer, fuzz distortion, wah, and an EBow and DigiTech Whammy for color on a few songs. He also has an assorted collection of classic Gibsons, Gretches, and Fender guitars, among others.

Edge’s sound is all about economy. If he kicks on the distortion then it’s to punctuate or to give maximum impact to a song. But, for the most part, his sound is fairly clean with a multitude of delays and echos.

Edge takes his delay effects very seriously and reportedly uses different units for longer and shorter delays. He’ll often use two long delays together at different tempo settings and send them to two different amps. This, no doubt, allows him to fine-tune a complex delay pattern that is his signature. In playing a U2 song, the real challenge will be getting your timing right with the delays going. Edge has had decades to master this technique. Just listen closely to how he approaches it and concentrate on getting the movement of your picking hand solid.