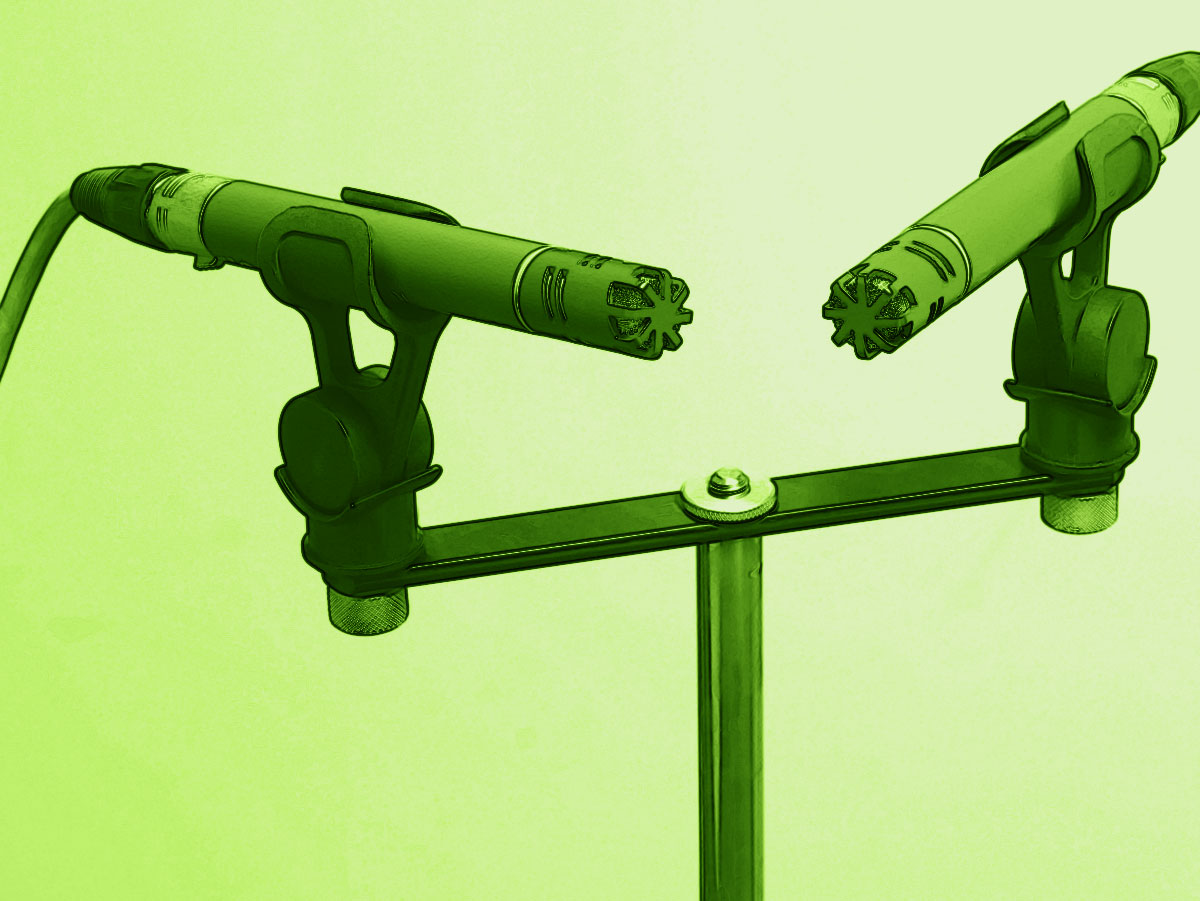 Gearing up for that once-in-a-lifetime live recording? Make sure you get a good sound. Mic placement matters and you've got a bunch of options.

A stereo image is created by two speakers reproducing sound. The most noticeable aspect of stereo is the balance of sound between each speaker, which creates the effect known as phantom imaging, or the appearance of sound coming from imaginary points between the two monitors.

This acoustically pleasing monitoring method has equally interesting stereo recording applications, which, with some practice and experimentation, can add a new dimension to any audio production.

Recording in stereo gives the listener a better sense of:

Microphone manufacturers make a variety of condenser microphones, both large and small diaphragm, ideal for stereo recording techniques. Keep in mind that microphones have many different sound characteristics so your ears will ultimately have to determine which one is right for you.

Large diaphragm microphones are ideal for vocals, or any application where warmth and enhanced low end is desired. 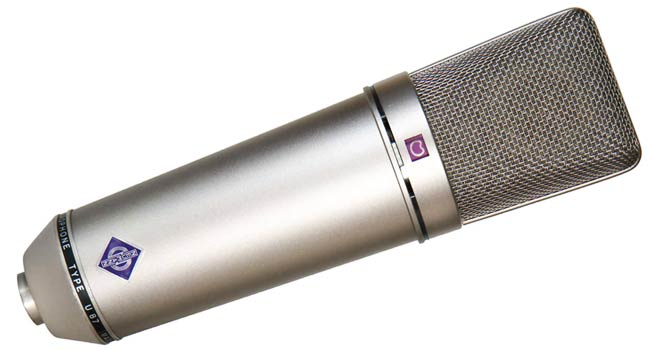 The Neumann U-87 is a large diaphragm microphone commonly used by professional audio engineers.

Small diaphragm microphones are excellent room mics as they are generally voiced to capture the entire sound spectrum evenly. Smaller diaphragms may lack the warmth of their large diaphragm counterparts, but they have a quicker transient response. Therefore, they can capture cymbals, snare drums, strings, and other "fast attack" sounds more accurately.

Try experimenting with different mic placements throughout your recording project to see what you like best.

Stereo recording is generally characterized by the use of two microphones and is often divided into two specific categories: coincident-pair and spaced pair. There is debate within the recording world as to which technique is better but, even after scientific studies, the best judge is still the individual.

There are a few major differences between the two. Use the following points to help you make an informed decision about which technique to use for your project.

Also keep in mind that, although these two methods are the most widely accepted, they are by no means the only ways to record in stereo. Try experimenting with different mic placements throughout your recording project to see what you like best.

In a coincident-pair, the diaphragms of two microphones are placed as close together as possible, and angled differently in order to capture a stereo image.

Coincident-pair is the more accurate of the two techniques. Since the microphones pick up sound at the same location, there is more phase accuracy than a spaced configuration, though less ambience is recorded. Because the microphones are located on the same plane, imaging is more directional, making it easier to detect phantom images in the stereo field upon playback. Of course, make sure you pan each track appropriately on playback so you hear the stereo image!

The most common form of the coincident-pair technique is the X/Y combination. The angle between the microphone grills can vary from 90 to 120 degrees, facing towards the sound source.

Cardioid microphones are the best choice for this setup, as the stereo images will appear more dramatic and focused. Be sure to pan each track so that you can hear the imaging. The X/Y array always uses two microphones of the same make and model to ensure a consistent stereo image. 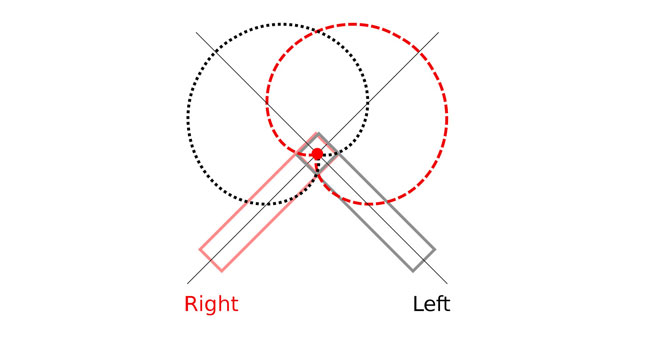 Variations on a theme.

These set-ups are all variations of the spaced and near-coincident pair. Their designs are very similar, with the major differences relating to the distance between the mics and the relative angles of their position.

The ORTF, or "Office de Radio-Television Diffusion Française" (designed by the French Broadcasting Organization) uses two cardioid microphones angled at 55 degrees away from center, spaced at 17 centimeters. This set-up is designed to approximate the human head and the effect of sound hitting the outer-ear. 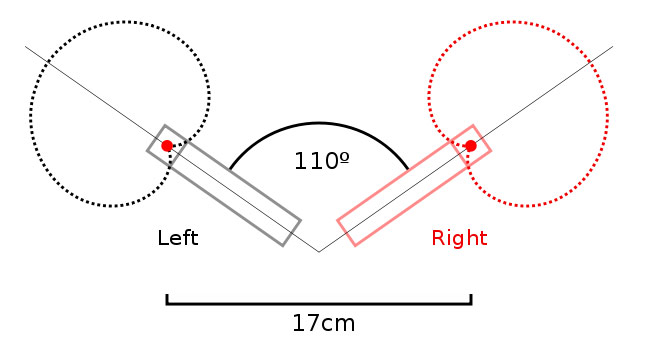 The NOS Array (Nederlandse Omroep Stichting, a Dutch broadcasting company design) uses two cardioids splayed at 45 degrees off center with a spacing of 30 centimeters between. 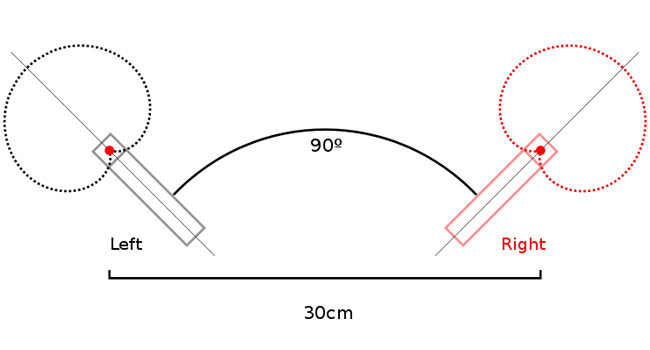 The Faulkner Array, designed by Tony Faulkner in the late 1970's, uses two figure of eight microphones, facing parallel towards the sound source and spaced at 20 centimeters. 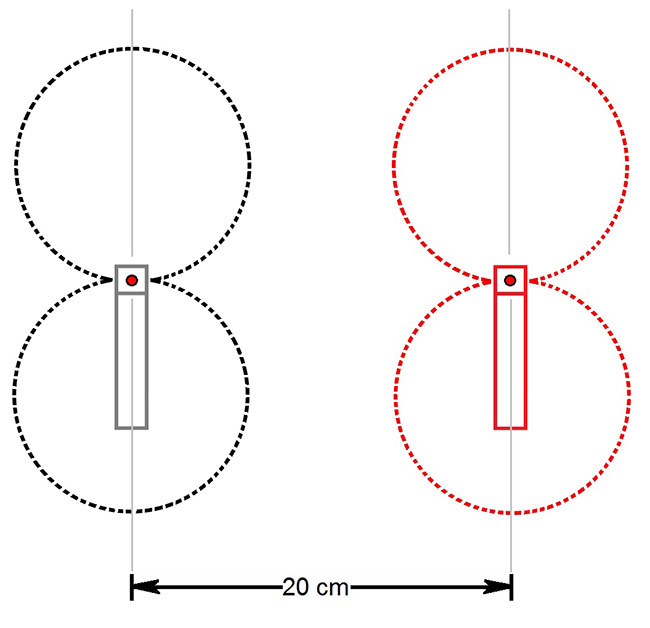 Even after all of the stereo recording techniques that have been explained in this article, there are many more! They range from microphones inside the ears of dummy heads (also called binaural recording) to mics separated with hard baffles.

The vast variety of techniques available is a testament to the fact that recording is not an exact science. Every session has its own unique needs, and the knowledge of the engineer is most important in determining the final sound of a recording.

Stereo mic'ing is just one technique that can be used to enhance your recording. For the best results with each technique, pay attention to detail, be precise with your mic placements and remember that the best final recording comes from the best initial mic'ing. Experiment with microphone types, quantities and placement until you get a sound you like.

Located just outside Boston, MA, Sonic is a designer and distributor of quality musical instrument components and accessories.