The Types Of Microphones And When To Use Them 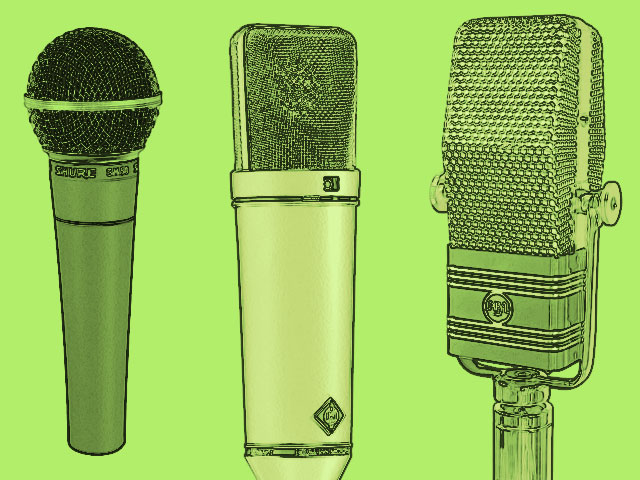 Producer Derek Chafin looks at the four basic types of microphone, their patterns and the best place to use them.

First a word on patterns

There are 4 main types of microphones: cardioid, super cardioid, omni and figure 8. These names describe where and how much the mic will pick up.

Cardioid: Imagine a Japanese fan coming from the tip of the mic. That’s the pattern it will hear sound from.

Super Cardioid means the fan is not fully unfurled – a tighter pickup area.

Omni means all around, from everywhere – think a globe around the mic as it’s pick up range.

And finally, Figure 8. Put the mic in the center of the 8 and it’s a visual to the pattern it will pick up – not much if anything from the side and everything in front and in back. Very useful in rejecting sound you don’t want coming in from the side.

There are three different categories for mics: Dynamic, Condenser and Ribbon.

Dynamic mics are what you usually see a singer singing into during a show. They are the hammer and screwdriver in your tool chest. They can be used on absolutely everything, but there are some parameters. Usually dynamic mics are best when used close to the source – not too distant for the sound. They can generally take a beating both in sound level and if you happen to need something to pound a nail in on stage. They are awesome and beloved. Snare drum to Marshal stack to Adele’s live vocals. Dynamic mics are not very good with the more subtle stuff or with something that needs more “air”, room or ambience. They generally have a cardioid pattern to what they “hear”.

Condenser mics come in all forms from pencil to big diaphragm. They need phantom power to work (48V). Usually there’s a button on a console or audio interface to power them – if not, you’ll need a phantom power box which you’ll plug the mic into and then from the box to your audio interface/mic pre/consol/whatever.

Condenser mics come in patterns of super cardioid, cardioid, omni and figure 8, and some do all patterns or some of the above in one mic.

Condenser mics are built to pick up detail – usually fantastic, but sometimes it can be a frustratingly truthful thing - the mirror can hurt! But they are precision tools. Most recordings have mostly these types of mics on them. Vocals, acoustic guitar, strings, piano, drum overheads, hat, kick drum, snare drum, room mics, guitar cabs, bass rig and on and on.

Size matters. Diaphragm size, that is. (Oh, you can tell yourself it doesn’t but it does.) Pencil condensers (named for their thin, tubular shape) have smaller diaphragms and are great on acoustic instruments. Large diaphragms are amazing on vocals, rooms, bass and even guitar cabs.

The typical “in studio” vocalist, pretending to sing to her newest track, adds to the fantasy by using the real large diaphragm condenser hanging there full of unrealized promise. Condenser = da bomb.

But, as for the choices between them, think top of the line Buick to Bentley. There are some really great and inexpensive mics in this category and then there are some classics that will make you understand the price of coming to the dance.

Ribbon mics have been around forever. Old news reels have a large mic in front of the road-hardened newsman, along with pic of our greatest singers from the 30’s, 40’s and 50’s singing into a ribbon mic.

They are all figure 8 in pattern. In recent years ribbon mics have come back into favor like Travolta after Pulp Fiction but more so. The new generation isn’t noisy and doesn’t take a bunch of gain to get them to a recordable level.

They are also amazing on guitar cabs, rooms and drum overheads. The modern idea to these mics is to make the top end sweet and musical, and the low end rich and usable. (Like that isn’t ever a worthy thing.)

Pick your hammer and start swinging!