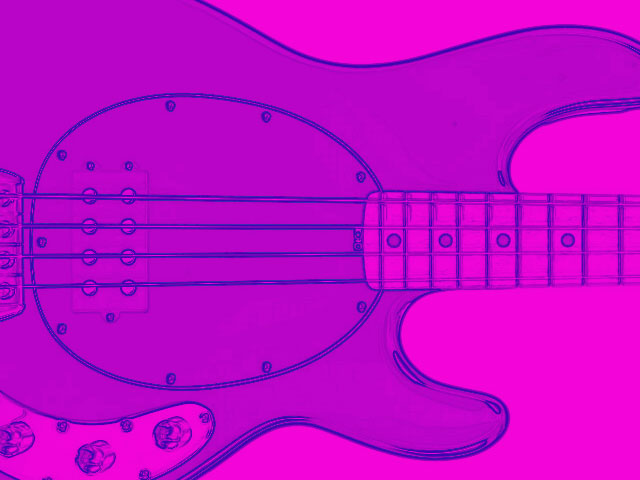 Producer Derek Chafin tackles the issue of recording Bass through an amp, direct into the board, and mixing both together.

Thunder. Ah yes. So you’ve spent hours trying to get the perfect bass sound in your mix. You’ve twisted every dial the EQ has to offer and punished the compressor. Whether you’re looking for pristine, click, distorted, or plane ol’ bootylicious, the method to achieve your desire starts in the same place: tracking (recording) it properly.

If you can chat with the player before the session, make sure they have their bass “set up”. If they don’t know what that means then they need to look online or at the local music store. It relates to string height and implies string noise (when string makes a clicking sound or rattle against the frets).

Sometimes the strings are too low and others times the player is just beating it too hard like their fingers are ball-peen hammers. It also refers to intonation, which means that the bass is in tune regardless of string or position on the fretboard. Oh, the countless hours I’ve wasted ducking around a badly set up bass – always with less than desired results.

Put a new battery in it! If it has “active” pickups, it means they need a battery to work. Don’t waste time or make everyone wait to find a screw driver or drive to the local store. New battery, in before the session.

If you’re not going for a James Jamerson sound (see: every classic Motown and soul tune, just about, and a nod to Bootsy) then be the Samuel L. Jackson of bass and change your motherf$%^in’ strings - the day before or even a couple. They’ll be stretched and ready to stay rock steady for the session.

The instrument and the rig are first, mic choice and placement are second. Have the bass player get in front of the bass rig and play their instrument through the amp. If they like the sound, you’re more than halfway there. If you don’t, at least you’ll understand what the player is going for in a general way.

But what if you know that sound won’t translate? Depends on your relationship with the player. Can you suggest things without them getting their panties in a bunch? If you can, then go for it. If not, you might try to tell them that this sound is awesome live and that you want it to come across just that way, but recording is a different medium and with a few tweaks they will be a godhead.

Try not to turn the amp up to 11. A moderate volume can do wonders when recording – you’d be amazed how good things can sound with moderate amp volume and good mic placement. On amp volume, think of you standing in front of a fire hose. If you can’t brave it then the mic will probably feel the same way and what you’ll really be hearing is the sound of surrender, with the mic soon to bring you up on assault charges. Turning it up doesn’t always translate that way on playback.

I try not to have too much low end from the amp. I’m looking for a crisp top, but not harsh. And lots of punch on the high mids (1 KHz to 3 KHz range). This is part of the bass that will really come through on your mix and give it definition rather than a low end sloppy roar.

Don’t get carried away with how low it can go – just enough but make sure the top end is there and right.

I listen again and start adjusting: the amp’s EQ, placement of the mic, or both depending on what I’m going for. Some people like the mic up against the grill and others prefer 2-3 feet back. It’s a taste thing and there’s no wrong or right. Each gives a different sound so pick the one you dig or the one that’s right for that particular track.

If you have the luxury of different mic pres, match the pre to the tone you want. If you have a compressor in the chain, I suggest a lighter dip into compression – you can always smash the crap out of it later in the mix. Just enough compression to get a good hot level in but not enough to squeeze it to death.

Some people don’t have the luxury of recording a bass amp or a good enough sounding rig. This is where a D.I. box (Direct Injection) is your BFF. Plug a cable from the bass to the “In” of a DI box, the Mic Line-Out of the DI to a channel on your mixing console or audio interface.

Even if you are recording an amp, I suggest you also simultaneously record the bass with a DI box. Some amps even have a DI-out on them – some with the signal as it comes from the bass itself and others after the settings on the amp (try not to use this way – it limits what you can do later).

Every DI has a “Thru” or “Out”. Take a cable from the “Out” and plug that into the “In” of the bass amp. You can now blend the two or just use one.

(Note: You’ll have to double check the “phase” is right between them. To do this, click the phase button above one of these channels in your recording software on playback. You’ll notice the bass getting bigger with more low end or small and thin depending on the setting. Bigger is better.)

If you’re using two channels to record the bass and have a stereo compressor, make sure the compressor is on “Stereo”. Feed enough signal in that hits both sides of the compressor equally. If you only have a mono compressor, don’t use compression! Things will get funky in a bad way if one channel is compressed and the other isn’t (or isn’t at the exact same settings.)

Now hit record and lay down that bottom!