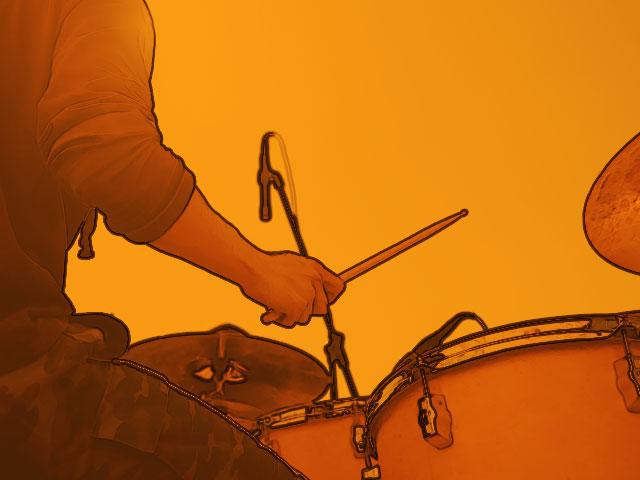 Good music is music that grooves. But how do you make that happen? As always, there is more than one way to get the job done.

Modern music, in a ping-pong match between producers and listeners, has been getting louder, less pitchy, and tighter in timing. Some of this progression in tightness is natural (musicians are getting tighter during performance), while often it is artificial (producers are tightening up the recordings in post-production).

Assuming the musicians have tuned up and are playing in key, when we judge the “tightness” of a performance or recording, we are considering how coherent the groove of the piece is between players. It is not enough for each player to be tight around their own groove; all of the players in the performance (or tracks in the recording) need to be “locked in” to the central groove of the performance/recording for it to sound tight overall. Quantization is a post-production technique that you can use to tighten up the timing of a recording in a way that’s similar to how auto-tune can lock a vocalist down to a melody – it is kind of like having “auto-groove”.

While working with quantization during attempts to assemble songs from the loose tracks of creative recording sessions, I have come to appreciate the groove that arises naturally as a result of human expression (and error) and now try to preserve as much of it as possible.

A little extra patience and attention to the details of the groove during the tracking stage could result in a reasonably tight sounding recording that still has those subtle and expressive human deviations from perfection. At the very least, tightening up the groove on its way into the recording hardware gives more flexibility in the mixing room. When producers tighten up the sound of a recording in post-production, they are squashing down various dimensions of the music (loudness, pitch, timbre, timing).

Though great experimental sounds can be made through intentional squashing of these dimensions, I like to remain in control of this process and always reserve the option to not alter the sound of a particular track and still have it sound like it fits into the central groove of the tune. If you currently use quantization extensively, you may find that you can bring that “organic” sound to your mixes by peppering in a track or two that have their original (un-quantized) groove.

Whether you are a producer who loathes quantization, one who can’t listen to anything without it, or somewhere in between, there is knowledge to be gained by looking at what producers are doing when they manipulate the timing and groove of a track. Here, we will break down groove into its various parts; how you apply the knowledge, as always, is up to you. This knowledge of groove can be applied intentionally during your own performance, in communicating with band members, and while coaching a musician towards a more coherent take in a studio session.

Music software now allows producers to quickly chop up a recorded signal and time-shift each event (e.g. drum-hit) so that the resulting signal locks in with the grid. There is even the ability to stretch sounds in time without changing the pitch, which makes this whole quantization seamless. The result of this straightforward type of quantization sounds sterile and robotic (which is desirable under some circumstances) since the notes are, unless instructed otherwise, quantized strictly to the grid with zero groove.

It is possible to add artificial groove while quantizing, through the control of the “swing” and “slide” (covered below); and some software allows each note to be partially quantized, shifting the note some percent of the way between the original and quantized times, maintaining some of the human variation in timing.

This may seem too basic to bother discussing, but let’s give it a minute. You can think of the tempo as the inaudible spine of your track, with all of the audible features working to flesh the music out and give it form. Often, as producers we start out with a click track (metronome) that eventually gets muted once the recorded instruments can carry the central groove. It is important to understand that in doing this, we have squashed out one dimension from the music – the ability for the music to speed up or slow down, either subtly or dramatically, without automating a tempo change in the click track.

Great live performers have no problem playing at a nice steady tempo, and use deviations from this tempo as a form of musical expression. Though it would be ideal to preserve every bit of humanity in a recording, abandoning the click track usually means headaches in the editing room. As a result, many studio sessions begin with a debate between the producers and the performers as to whether or not a click track should be used.

If you are a musician playing in a studio, it is usually best to go with the producer on this one and play to the click. You don’t want to start a session out with tension, and it really does give much more flexibility to the producer in the editing room – even if quantization is not used, workflow is greatly improved by having the music synced up with the grid so that it is easy to select bars and song-sections. It also does a lot to tighten up the sound of the track, as overdubs upon overdubs can amplify erratic tempo fluctuations resulting in a loose-sounding recording. On the other hand, if you aren’t planning on doing a lot of experimental layering with overdubs and want that live-off-the-floor feel, you may decide that you need to forego the click track.

These days, many musicians are also playing the role of producer and engineer in their home-studios. In this case, you get to do whatever you prefer! If you choose to take on the additional work associated with departing from the click track, then that is your choice to make. You can make you’re your own creative alternatives to a click track by slapping on knees, or using some percussive instrument – these can be scrapped as scratch takes, though they can also end up becoming part of a finished recording.

Fig 1: Swing is the delay applied to every other note.

Swing, in terms of groove and timing, is a delay placed on every other note of a rhythm. Let’s talk about it in terms of a series of eighth notes, for example (some programs apply the swing to sixteenth notes, by default). You can see from the following figure that to add in some swing to the groove, we are delaying every other eighth note (the blue notes in figure 1):

The swing can involve a delay anywhere in duration from zero to the length of the eighth note. When the ratio of the duration of the long and short beats is given by whole numbers, we get a few special cases. The triplet-swing comes when the first beat is twice as long as the third, with a ratio of 2:1. In music notation, it looks like this (Fig 2: where the 3 above means triplet):

A heavier swing may have a ratio of 3:1, and this would be written with a dotted eighth (meaning an extra half-beat in duration) and a sixteenth note (Fig 3).

Music software allows notes to be quantized to a grid that has swing. Swing can generally be quantified as a percentage corresponding to the delay between zero and the length of the swung note (in this example, an eighth note). If you end up with a mismatch in groove between two tracks in a recording, this approach can be used to align the swing of one track with that of the other.

Sometimes, a drummer will intentionally lag the snare hits (for example) behind the central groove of a song, giving it a laid-back or dragging feel. They also may bring in the snares a little ahead of schedule, leading the meter and giving the song a rushed feel. This shift in the timing of a certain instrumental part is called slide. This can also be controlled in many software packages that allow for quantization.

Another way of getting our robots to play like humans is to introduce random deviations to each note from the meter. All humans, some more than others, have a certain degree of random error to the timing of their notes, and so adding in this randomization in the timing can really make a quantized recording come across sounding organic.

In terms of the timing of an individual note, there are two important values that we care about: start-time, and duration. When we talk about swing and slide control, and randomization we are referring to manipulation of the start-time of each note. The duration plays a crucial role in the rhythm of the piece. With MIDI-instrument parts, it is quite easy to manipulate note duration. When working with recorded audio tracks, note duration can be controlled through digital stretching or shrinking of the note, which can be done digitally without affecting the pitch and timbre.

Natural groove still contains all of the elements that we have discussed here. If we compare something played by a musician against the metronome, we will find that there is always some degree of swing (even if a small degree – bebop musicians intentionally work to minimize swing in melody lines as a reversion from the swing movement that preceded it), slide, and random deviation. Whether I am listening to punk rock or house music, my personal preference is to be able to hear humanity. I like to hear live-played tracks in a tune (even if it comes from someone banging on MIDI drum pads in a bedroom studio) because they convey information and intentional expression that would otherwise be lost to quantization, or the use of drum machines and arpeggiators. Having said that, I’ve also heard many arpeggiator lines and robotic drum loops that really moved me. With music, you need to listen to what your ears are telling you and decide whether you need to bring the sound of perfection or imperfection to a particular recording.

Martin Gerber is working towards a PhD in Engineering Physics focused on solar energy research. He also skateboards, produces multi-genre music and plays in the band Stereography (vocals, guitar, and keys).