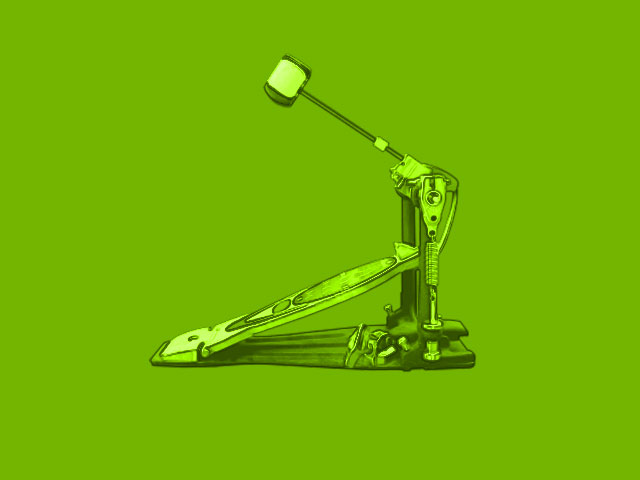 Part 4 in the EQ series covers the basics of kick drum equalization in the studio.

As a percussionist, I'm going to avoid the temptation to breeze through all of the drums collectively, and try to remain fixated on individual parts of the kit. Because every part of the set's timbre and role are so different (and specific), and that each drum/cymbal/auxiliary toy has a different purpose relative to the whole ensemble, it's important to stick to each part on its own.

The kick is one of the two most common driving forces (the other obvious one being the snare) in the drum set. Depending on the genre of music, it can be wet 'n sloppy with a distinct resonant tone (jazz or classical), or in contrast, can be nearly pitchless, with a focus on the beater's attack and almost clipped-sounding waveform (some rock or hip-hop). Every situation is different, and suitably, the EQ will differ as well. I'll focus on a couple drum set situations where different approaches could be used: jazz and pop/rock.

In jazz, the drums sometimes add a melodic element to the piece of music. Oftentimes, jazz drummers pay careful attention to tuning their drums in distinct intervals, sometimes associated with common keys. The kick is often no different, and thus is performed and EQ'd uniquely. While a lot of kick drum EQ'ing involves minimizing frequencies that share similar dominant frequencies with other ensemble instruments, in jazz it's important to not automatically kill these relationships out of custom. While in a lot of rock or pop music the kick's role is often on alternative beats to the snare, driving the rhythm forward, in jazz the kick isn't necessarily involved in a song's core drum part. Often, its primary role is to accent or highlight certain hits in a tune's melody or another instrument's counterpart. In big bands, this is oftentimes a bottom-end instrument such as a trombone.

It begins with the mic.

When thinking EQ, always start with your mic setup. It's fine to start with a common cardioid pattern, large diaphragm, dynamic bass drum mic such as an AKG D112 or Shure Beta 52A and place it in right on the outside head, or inside the shell to get those deep, punchy accents a kick is there for. A little less common though, also think about those crisp tones you could get out of a better representation of a complete frequency range. This is particularly useful in jazz. Adding a large diaphragm condenser a foot or more away from the outside head can give you some nice options when trying to add more tonal complexities to your kick sound. If the room sound as a whole is good, giving a few more inches of distance to this can pick up some pleasant reflections within the room that may surprise you.

EQ-wise, it's best to stick pretty natural with jazz, taking the quality of the instruments you have to start with. Spend a lot of time getting good sounds, because you may not have much editing options considering the very live and spontaneous nature of the genre. Consider a high pass filter around 40 Hz, and a couple dips around 200 and 400 Hz. This setup is pretty common. Also, think about a low pass filter gradually starting around 10 KHz. This will help control your sound a bit. Lastly, find some of the prominent tones in the bass guitar/upright bass, and compensate your kick EQ so that you make room for these (again, don't just kill 'em). While you don't want to automatically remove these relationships, it's important to consider them so that there are no harsh transient sounds. Use a tight Q to pick out some of these and cut at your discretion.

Rock and pop offer a much broader range of kick drum sounds. There are so many contrasting kick sounds evident within genres, you'll find striking differences not only between types of music, but between bands, albums, songs.. even at different sections of songs. There is no right or wrong, but there are some common places to start.

The most common approach is sticking one of those cardioid pattern, large diaphragm, dynamic microphones aforementioned into the drum itself, or right on the outside head. Sometimes it's fun to stick a small diaphragm dynamic (such as an SM-57) on the back head by the beater's impact point. This will give you a less tonal, but tight attack that may be useful to mix into your final sound. From here, it's anyone's game.

My opinion is, go for that gutty sound right off the bat, and ease back if necessary later on. Getting that sweet, punchy sound from micing alone (and drum tuning, beater and head selection, etc.) is going to make the EQ and compression in your mix that much easier. When doing your mix, start with some of the EQ ideas from above. Think about tightening the high and low pass filters a bit and rolling off a little earlier. In this genre, we generally want to scale back any strong pitch resonance and focus on tighter, more impacting sounds (dominant in the low-mid range) that aren't saturated with melodic undertones.

Again, solo your bass guitar and kick to focus a tight Q reduction on a few problem areas. You may also want to listen for some higher punch in the high mids (say 4-7 KHz) to bring out. That mic you placed by the beater will be helpful when considering this. I can't preach it enough. Get good sounds. Spend that extra hour in pre-production to make your life hours easier in the end. Get decent equipment, tighten any loose metal lugs to reduce rattling, and place those mics in spots where they won't get hit by anything other than the sound they are picking up. Don't ruin the perfect take (or at least the one where the drummer stuck to the metronome) because of a kick drum that moves and inch or two forward, ultimately banging into your mic and giving you a wonderfully useless sound you'll spend hours trying to recreate... or replace.