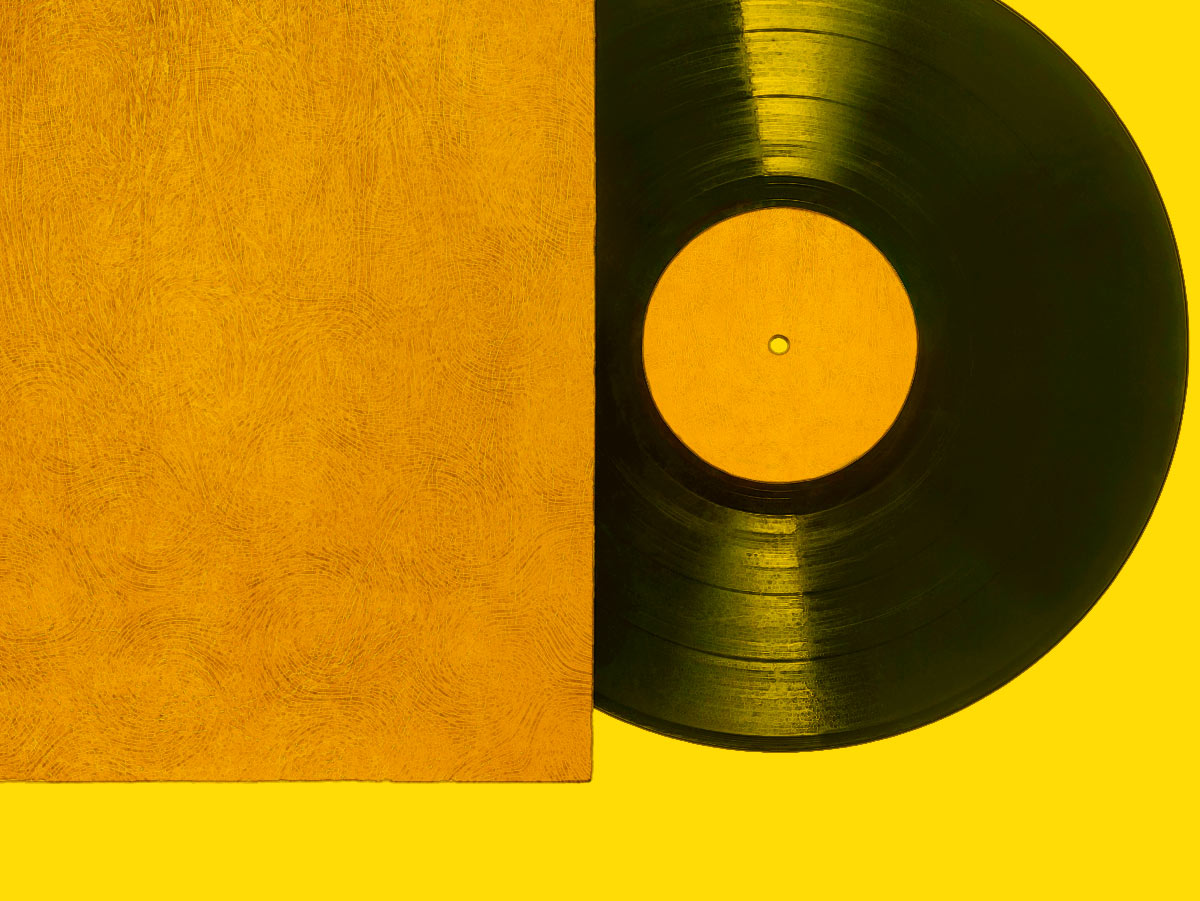 The art of making a vinyl record is as much about what you don't do. Knowing the most common setbacks helps a mastering engineer keep it between the lines.

As consumers, you know that the condition of the vinyl is very important in determining the quality of the playback. Ticks and pops get much worse if the record isn't stored right, or isn't cleaned well. Sometimes visible scratches are audible and sometimes they aren't. And sometimes a good cleaning makes a world of difference… and sometimes it doesn't.

That’s because not all of the noise in the playback of the record is a result of the vinyl itself. The entire process from cutting, handling, shipping, cleaning, plating, pressing, cooling and packaging can cause noises to be introduced. But where it all starts is at the cutting stylus. If the cutting system produces a “dirty” groove, then the record will never sound quiet. So we have to scrutinize the quality of our cut on each and every lacquer.

Poor groove quality can cause noise to be recorded in the groove due to a variety of issues. Here is just a small list of visible groove abnormalities that show up in disk mastering:

If the cutting stylus picks up a tiny speck of debris, it can cause the groove to be cut with parallel streaks down one or both of the groove walls. Some streaks are completely inaudible. Others can cause bacon-frying static.

Either the top edge of the groove or the bottom edge of the groove can appear jagged. The first thing to be concerned about when we see a jagged groove is that the stylus may have been damaged. Each sapphire stylus will cut many sides, but if it strikes the aluminum plate—or if it cuts over an imperfection on the disk surface—the stylus has to be replaced. 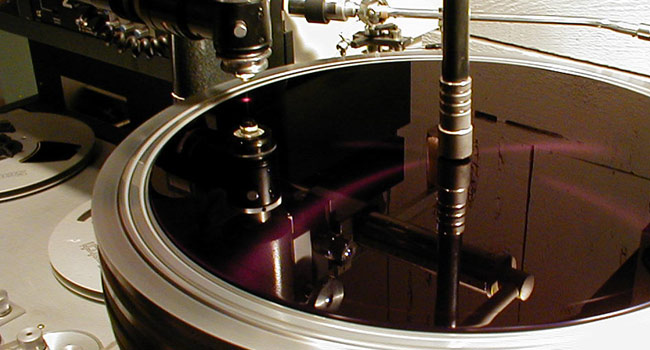 Most cutting systems use a small electrical current to heat the tip of the cutting stylus. This helps the stylus glide thru the cut like a warm knife through butter. If the stylus heat doesn't match the lacquer black and/or the stylus, you get groove quality issues. Both too hot and too cold are a concern. Both extremes cause hiss and surface noise to increase.

There is one more quality control issue that plagues the record making process. A high frequency squeal can be caused by many factors. This noise is the most dreaded of the cutter-induced noises. Sometimes is can sound like a buzz, or a very high-pitched whistle. It’s not loud, but it can clearly be heard in the quiet sections of a classical piece or in the blank sections between songs. It’s very difficult to make it go away and it can really slow down the process.

Many a sane mastering engineer has been thrown into a foaming stupor over this issue. I’ve seen it happen and it’s not pretty. In fact, years ago one Masterdisk engineer used to take his personal frustrations out on the poor lacquers themselves. You see, if the lacquer chip didn't get picked up by the vacuum—or if there were any noise problems with the cut—you had to discard the lacquer and start the process all over again. It’s like glass blowing: your final product was either perfect – or it was scrap.

You could tell when this engineer was having a bad day when there was a pile of V-shaped, partially-cut lacquers sitting in or next to the waste can, or sometimes against the wall outside his room where they landed after being thrown in disgust. He would bend the disks in anger over his knee. It didn’t help the mastering process at all, but maybe it helped him emotionally. Cutting a quality side is indeed part skill, part luck.

In short, it’s a vibration, usually caused by the stylus skidding through the lacquer instead of smoothly slicing through.

This demon goes by many names. Chip squeal, cutter squeal, chip drag and many others. In short, it’s a vibration, usually caused by the stylus skidding through the lacquer instead of smoothly slicing through. It can also be caused by the extraction of the chip. Now this part gets interesting. Chip is the tiny piece of lacquer that is removed from the disk as the groove is cut. The stylus is like a tiny plow or wood gauge that lifts up this hair-thin “line” of lacquer. A vacuum system then takes it to a jar for safekeeping. Safety is actually a concern as this nitrocellulose is extremely flammable.

So, as this chisel-shaped stylus is carving up the chip, the vacuum has to carefully draw it away from the stylus. If the velocity of the vacuum is too great, or the chip falls on the lacquer, or if the lacquer is too soft or too hard, or the stylus is a little caked with lacquer, or… (you get the point) then you can get a very high pitched squeal recorded into the groove. Remember that each and every motion of the stylus is analogous to the audio. The chip vibrates like a microscopic guitar string and that vibration can cause the stylus to move, which creates undesired results on playback.

So, if something foreign is added to the groove, it turns into audio when the cartridge plays it back. A scratch, a glob of lacquer, a squeal from chip drag, or even low frequencies transmitted from the building floor up into the turntable platter as it’s being cut. In fact, if you stand right in front of the cutter head and speak loudly, you will hear your voice played back in the recorded lacquer. That mechanical transfer of sound into the groove was how the original edifone worked. How cool is that.

An aside: First edition pressings.

If you're a collector of first edition pressings, you are already aware that they do indeed sound better than later pressings. There are several reasons for this, but the main one is that it takes a lot of effort and extra time and money to cut that first record.

Independent mastering engineers and studios usually charge by the hour, and are closely supervised by the producer of the record. Every nuance is considered, and, for major label releases in the ’70s and ’80s, almost no expense was spared to make the best sounding record possible. 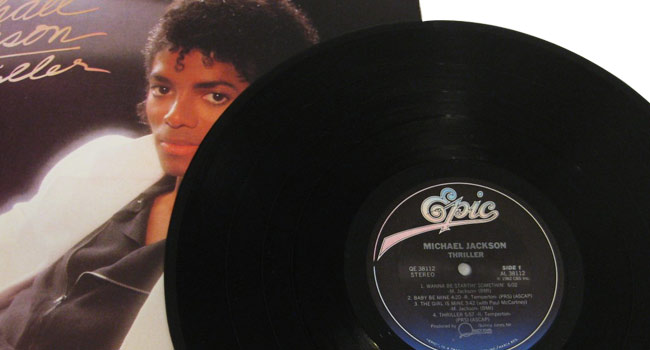 The first pressing of a vinyl record is handled with the utmost care. The same cannot always be said for subsequent editions.

When a record sold very well and had to be pressed again (second or third edition pressings), those later lacquers were rarely cut by the original mastering engineer. Each label had its own in-house mastering facility. And, while in some rare cases labels spent the time and money necessary to create really high quality masters, the fact is that most did not. These mastering studios were run more like union shops, and the managers and engineers were given the task for the day, and in general they were not highly motivated to produce the highest quality product.

I'm not saying that the engineers were less competent, as many of them had years and years of record making experience. But the equipment and the general quality control were just not as specialized as they were at an independent mastering studio like Masterdisk.