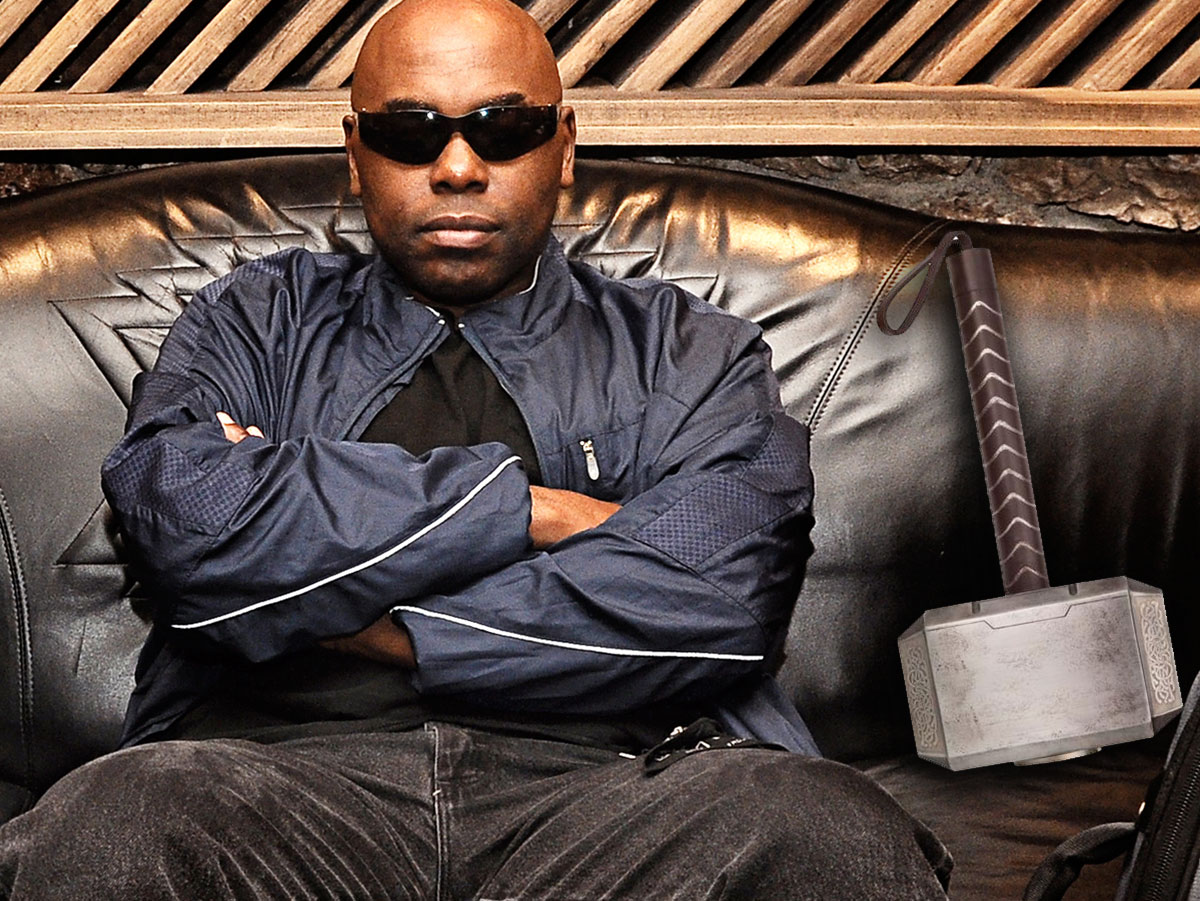 Attention all Public Enemy and Marvel fans: your ship has come in. Hip Hop history's greatest will now blow your mind with this new single (and video) featuring—wait for it—Thor. Oh yeah, and an exclusive interview with Brian Hardgroove himself.

Do you like super heroes? Are you a self-proclaimed hip hop fiend? Are you sitting down? Good. Allow me to suggest an early birthday present that will cost nothing, yet elevate the content of your iPod immeasurably:

But first, a story.

The other day, fellow bassist and musical director of Public Enemy, Brian Hardgroove, called to tell me about this track he was doing with Chuck D (yes, that Chuck D). "It's got this tie-in with Marvel. Thor in particular," he said.

What freaked me out was that my wife, Cora, and I were in the middle of watching The Avengers when he called. And, paranoid neurotic freak that I am, I immediately assumed Hardgroove had embedded a spy camera in one of my cats and was totally messing with me.

I emailed Brian, “Fucking love this. Let me know as soon as you have the final.”

Cora did her best to assure me that no one from Public Enemy had implanted a tiny neural transmitter in Tinkerbell, that she was sleeping under the couch anyway (Tinkerbell, not Cora), and that Brian just has impeccable timing. He is a bass player after all.

“Fair enough,” I said, and we went back to finish the movie. (I don't want to give anything away, but in the end they beat the aliens and then eat Shawarma.)

A few days later Brian sent a rough mix. It was actually a video featuring his new track as a background to a series of vintage Thor stills sure to send any Comic Con attendee into a torrent of pleasure spasms. My reaction: Yeah, this is slick.

I emailed Brian, “Fucking love this. Let me know as soon as you have the final. We must put this up.” I have a way with words, no?

Well, today is the day, friends. Hardgroove has officially officialized the video along with an MP3 of the track for us to share with all of Earth (and Asgard).

I recommend downloading it quickly so you can be that person in your group of friends who always knows about the next best thing before everyone else. (chicks dig that.)

Never one to leave well enough alone, I then called Mr. Hardgroove himself and made him agree to a role-playing game (nothing weird) where I was Charlie Rose and he was, well, Brian Hardgroove. Here's what happened:

Kevin Jacoby: How did you get the idea for this project and its Marvel tie-in?

Brian Hardgroove: I wrote a version of The Hammer when Kenneth Branagh's THOR was in production here in New Mexico (Santa Fe) back in 2010. Being in the middle of a lengthy studio consultation in NYC at the time, I could not be at home in Santa Fe. So I wrote and produced the song in NY then let my business partner at the time handle getting it to the right people involved in the production. Somewhere during the process the ball was dropped and the song never got out of my camp. 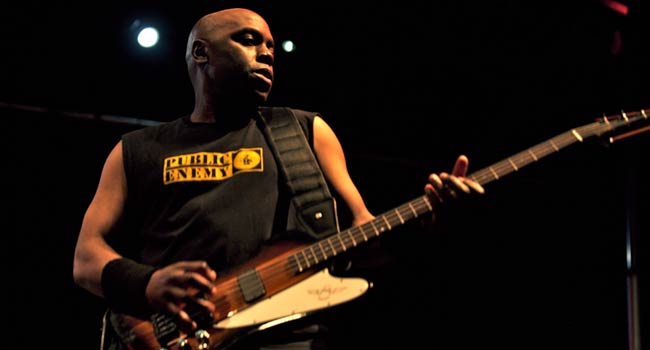 Brian Hardgroove on tour with Public Enemy in Australia.

Fast forward, I decided to do an entirely new version that blends many of the classic sounds from the time periods in which I was exposed to the character of THOR. Including groups like King Crimson, Mother's Finest, AC/DC and Public Enemy. I wanted to do a version that could hold up to the standard of a power-groove with smart music and a great vocal performance.

As far as the Marvel tie-in, I've always been impressed with Marvel's detail to character development in their comics. That depth hasn't always translated to the big screen productions in the past and the Marvel fan-base always made their disappointment known. I absolutely love the influence that community has. They are not ignored. This song is for them. I referred to them as the "MARVELOUS" during the entire production of this song.

KJ: Who were your first-call musicians for the project? Why pick those people?

HG: For me the drummer is the most important position to fill in any of my productions. I never go for drummers that have a drummer mentality. I look for cats (or kittens) that put song and groove over their chops. However, I need players with strong abilities to perform the songs I write. It takes a high skill level to make subtle complications feel smooth. So if I find a player with the right combination of attributes, I can let them do their thing once they understand the basic goal of the piece. This way I'll have a performance that works and serves as an inspiration for me. I have to be inspired while producing a piece from start to finish. The process is too long to suffer boredom.

For me the drummer is the most important position to fill in any of my productions.

Mike Boyko (drums) is the most inspiring drummer I've worked with in years—and I've recently played with a few cats that many would die to work with. Mike has all the qualities that I described plus an extra edge: familiarity. Mike and I are New Yorkers. We were raised on the same mix of musical impulses that created the last wave of the “New York sound” (long gone now). When we talk music, we speak the same dialect. The familiarity keeps the process moving smoothly and—just as importantly for me—takes me back to my earlier attitude of "we can do this and we should do it our way". So when it succeeds, it's the real us.

I’ve known Steve Price (guitar) longer than anyone else in my musical life. As with Mike, Steve and I drank from the same reservoir of music, TV and movies. Our ground is common and familiar to us. We get the jokes. Steve has made a powerful name for himself as a guitarist/composer with Thor Rock Warrior, but he’s infinitely more versatile than that. We had a trio back in the day that rivaled the best funk and rock of the time. Steve called me one morning just to catch up and I asked him to play the solo on The Hammer which I had planned to record the next day.

Johnny “Juice” Rosado (turntable) is my favorite turntablist period. Never heard anyone better than him. Juice is a “player”. He plays music. He is a close friend from the Public Enemy camp and one of the few cats in the business that has proven to be reliable and a loyal friend. When Mike Boyko floated the idea of a guitar and turntable duel, I knew that Juice was the only cat that could rock this track the way I wanted. 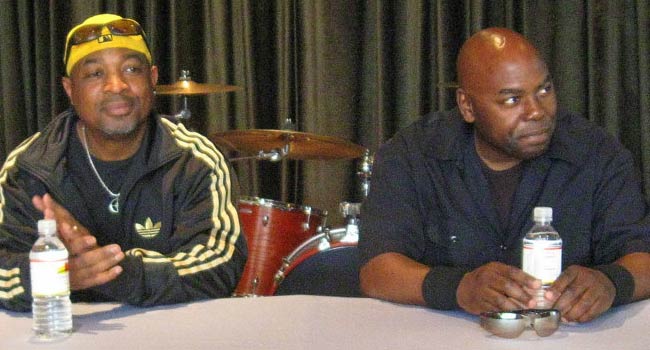 Chuck D (vocals): What can I say about this cat? Chuck is one of the greatest voices in modern music history. His delivery and tonal quality are impeccable. The track was designed from the ground up to highlight all the things that I dig about his sound and approach. The key, tempo, sub divisions, everything was built around Chuck.

KJ: Who wrote the music and lyrics, produced and did the arrangement?

HG: That would be me. I wrote the music pretty quickly. The inspiration was there and I didn’t fiddle with trying to make it radio friendly.

Chuck was always the first choice to perform it. Having worked with him as long as I have. I knew that it had to be made easy for him to participate (one of the busiest cats I know). So I didn’t want to delay production waiting for him to find time to write lyrics.

Chuck D is one of the greatest voices in modern music history.

I wrote the lyrics after doing research on the mythology of Thor the deity, the Marvel character and combining it with my memories of the early TV cartoon version of Thor. Arrangement and production are two of the most rewarding aspects of my musical career. The arrangement took some work to simplify but I got it done before the lyrics were finalized. Production was done simultaneously with switching DAWs and computer platforms. If there was ever a musical suicide mission this was it! With great tech support from Rain Computers I was able to emerge victorious. Sorta superhero like :)

KJ: Now that the video and single are out, what's the next step?

HG: I’m interested to hear the response of the Marvel fan-base. Then I’ll decide whether or not to do a follow-up tune for The Black Widow. I really dig that character.

What do you think?

Hardgroove is looking for some feedback. So here's what we'll do: You tell me, I'll tell him, and hopefully he'll put out another track soon. See? Everybody wins.