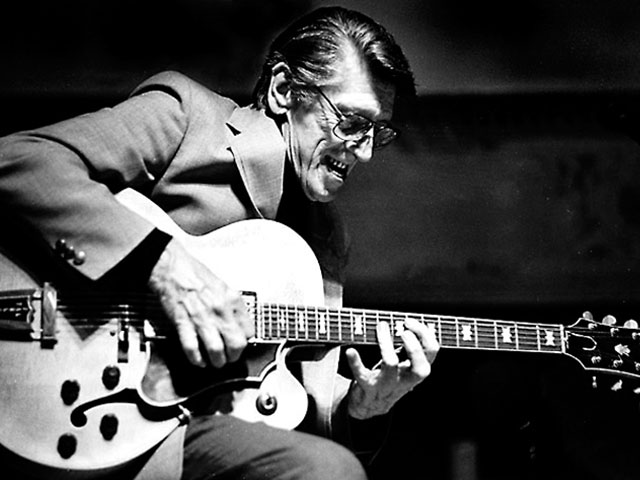 Tal Farlow was one of the best and the most influential jazz guitar players of all time.

Some called Tal the “Octopus” because of the way his huge, tentacle like hands ascended and descend his guitar neck. Tal played with the Red Norvo Trio from 1949–1953, and quickly became a jazz giant. Profiled in the definitive documentary “Talmage Farlow”, the guitarist can be heard on his own records for Blue Note (1954), Verve, Prestige (1969), and Concord.

After being named best guitarist in the Down Beat critics' poll in 1956, 1957 and 1958, Tal retired from recording and touring in the late 1950’s and moved to Seabright New Jersey where he operated his sign painting business—his main passion. Tal was just as famous for his shyness and his reluctance to embrace the fame and limelight. Throughout the years Tal would quietly appear at some local clubs, while fans from all over the world practically begged him to record and tour. He emerged again for some recordings and appearances in the later 1970’s and early 1980’s before vanishing again until the 1990’s. Tal was known as a super nice, humble and humorous person to everyone he met. While I am sorry I never had the opportunity to meet Tal, I was lucky enough to see him tour with Herb Ellis and Charlie Byrd in the 1990’s. Tal lost his battle with cancer in 1998.

Tal mainly played a Gibson ES-350 guitar, and later in conjunction with Gibson, released his Tal Farlow model. He played thick, flatwound strings which gave him a smooth, mellow tone. The flatwounds also contributed to his signature note muting, or artificial harmonics, also known as “the bongo effect.”

His amps were a Gibson GA and a Fender Deluxe or Twin—all tube amps. He did not use reverb.

Tal developed a unique innovative playing style which was heavily influenced by Charlie Christian. Tal’s playing and ideas were heads above the rest of his peers around that time. His use of unusual chord voicings, chromatic chords, and uncanny, fluid, speedy, sophisticated solos set him apart from the rest. Whereas others used single notes based on melodies, Tal would cluster notes, which helped bring out his famous swinging be bop groove, and he would never seem to run out of new ideas. Tal was the quintessential, be-bop, most swinging jazz guitar player of all time.