Setting Up Your Computer For Audio Production 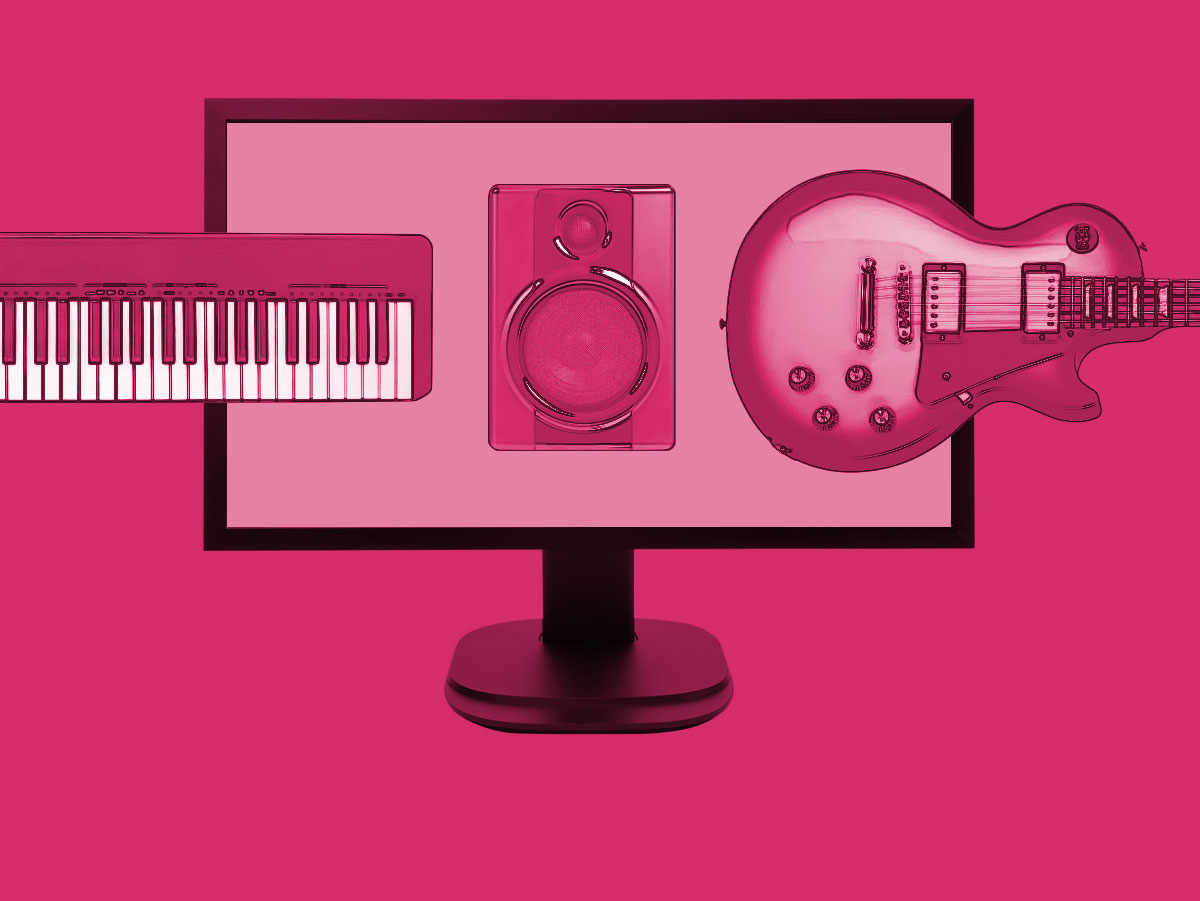 Having a home studio is awesome in so many ways. You just need a computer, audio interface and DAW software. When it's time to set them up, just follow these instructions.

Setting up your computer for audio production will open up a million possiblities. You can record your band, demo your songs and here all you rmusic back instantly without having to pay for studio time. But there are also a lot of moving parts and it can be confusing.

What everyone wants to know is how to set things up. The problem from my point of view is that it really does depend on what you've got and what you are trying to do. I get many emails from people saying they have this that and three of these and how on earth do connect it all and start making music? But the answer always depends on which gear you have.

Now don't go thinking just because you've got built-in, 7.1 surround sound with some kind of high definition Sound Blaster chipset that it's going to be any good for making music.

For instance, you have a hardware mixer and hardware effects which you connect in such a fashion as to make it do what you want it to do. It's the same with computer music gear. That said, there are some basic rules you can follow, and what you need to do is try to apply what I'm showing you to your own gear.

Most importantly, if you don't know why you need something then you don't need it. Mixers are a classic example: you wouldn't believe the number of people I've heard from who bought mixers because someone said they needed one, but have no idea what it is or how to use it. You only need a mixer if you know need a mixer. If you're not sure, then the likelihood is that you do not need one.

Another good tip with mixers is to count up how many boxes you have that make a noise. If it's just your computer then you don't need a mixer. If you've got racks of hardware synths and a keyboard, then you are going to want to "mix" all those sounds together so that they come out of the same pair of speakers. That's when you need a mixer.

So, mixers, if you have one knocking about, can be useful, but if you don't then you probably don't need one. Cool?

To make music on your computer you need a sound card. Most computers come with a rubbish one built in that gives you a mic input, a line input and line or speaker outputs.

Now, don't go thinking just because you've got built in 7.1 surround with some kind of high definition SoundBlaster chipset that it's going to be any good for making music. It'll do for starters but you may discover that it has many frustrating limitations and, if you make the jump to a sound card that's designed for music production, your computer music making experience will vastly improve.

One computer with built in sound card, one MIDI keyboard (optional), a guitar (optional), and a pair of speakers (these could potentially be headphones). Groovy. 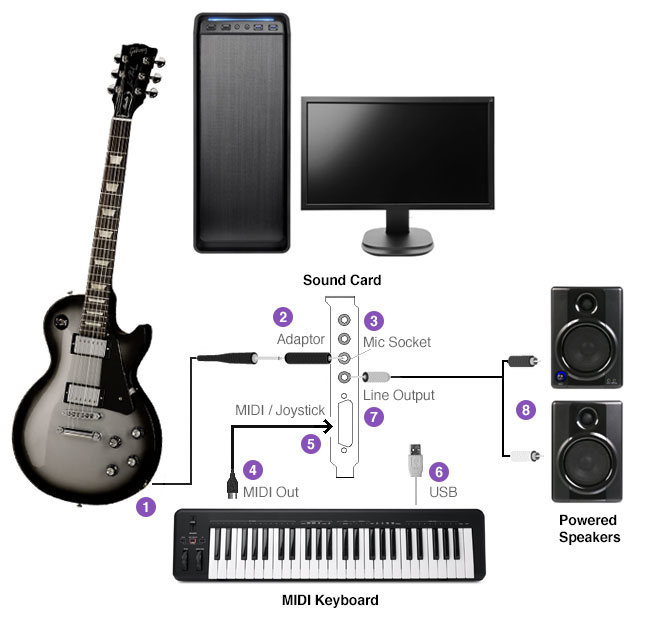 Just plug your gear into your computer's sound card or an audio interface and you're ready.

Okay, let's look at what's going on by numbers.

See, that was easy! Audio cabling is very simple and you can adapt any analog audio connector to any other—small jack to big jack, phono to XLR, bare speaker wire into jacks—whatever you like. All decent electronics stores (like Radio Shack) should have a good selection.

As I said, you don't need a mixer unless you know you need one. However, it's one of the most common questions I get asked so here's an example of how to use a small mixer. This could even be an old 4-track recorder with your computer. What the mixer does supply is a decent input stage for mics and instruments rather than using the little mic input on a built-in sound card. 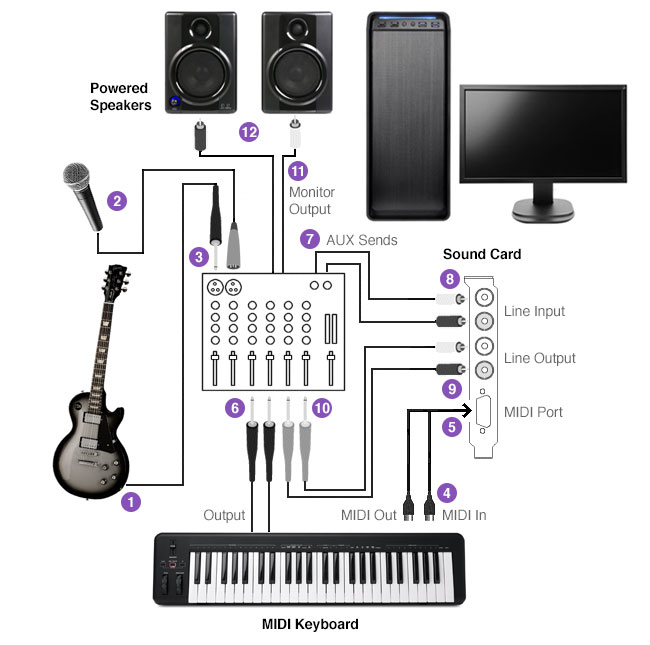 One computer, better recording sound card with high quality inputs, one MIDI synth keyboard with it's own sounds, a guitar, a mic and a pair of speakers. Let's see if you can follow this one.

So, we need to SEND the guitar and the mic to the sound card on it's own. How do we do this? We use SENDS. All mixers have an auxiliary send or two, sometimes called "FX Sends" as that's what they are normally used for: sending the signal from channels out to effects.

However, this time we are going to use them like an output, and send the guitar/mic channel out of the send and to the sound card. So, turn up the send knob on the guitar and mic channels, and make sure the sends on the other channels are at zero. Now we'll be able to hear the synth, but it won't get recorded with the guitar.

If your mixer has direct outputs, tape outputs or busses then you don't need to use the auxiliaries, just treat the computer like a hardware recorder.

A good note to make at this point is that, although you're using a mixer, you're not actually using it to mix anything. All you've got is a stereo output from the synth, possibly carrying multiple tracks of different instruments and the stereo output from the computer, which could carry a couple of guitars, vocals and harmony. So, all the mixing needs to be done on the computer, in you DAW.

Also if your mixer has direct outputs or tape outputs or busses then you don't need to use the auxiliaries, just treat the computer like a hardware recorder.

Got questions? We're here to help. Just leave a comment below so everyone can join in the fun.