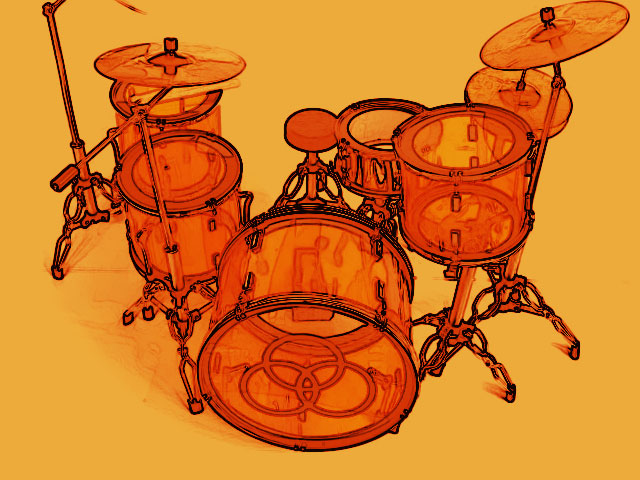 History is full of great drum sounds. The first step to getting yours is picking the right mics and putting them in the right spot.

Of the limited mic options there are, three that stand out. The first is a single mic well placed in the room. This will give you a low-fi, early rock n roll sound – because that’s how they did it.

If you have four mics there is the Glyn Johns method. A ton of classic rock records were recorded this way. It involves 4 condenser mics in very regimented positions. A quick search on YouTube will give you lots of people’s ideas of what the method is and also new variations on it.

The general idea is forming a triangle around the kit with the kick drum mic about 2 to 3 feet in front of the kick drum with it “looking” at the top rim of the kick drum. Another mic is placed looking across the floor tom pointed at the hat, the third mic high over the snare and kick pedal, and a fourth mic close on the snare.

Phasing is very important. Being “out of phase” means that mics are canceling each other out which leads to a small, toppy sound. When they are “in phase”, you’ll have a full warm sound. Lot of engineers actually get out the tape measure and check angles of not only the relationship of the mics to the drums but the mics to each other. It can get very pocket protector-y but there’s also reward in it. In this method you will need the tape measure and you’ll also have to pan the proper way to mix it.

Another method is the Ringo sound. The original was done with 2 dynamic mics and one ribbon mic. A ribbon mic was set 1 to 2 feet in front of the kick looking dead center to the kick drum. A dynamic mic was placed above the snare’s front rim and looking slightly down to the snare. The other dynamic was placed shoulder height just over the rack toms and looking 45 degrees down – which captured the rack, floor and cymbals. You can also place this mic just over the head or shoulder of the drummer looking at the kit but be careful of phase.

Remember there’s a lot of lore involved in these techniques–lines get blurry about how it was actually done. And, also remember you probably won’t have the same gear as the classic recordings which will affect the outcome–for better or for worse becomes a matter of taste. And matter of taste is the constant overriding point of recording.

For modern recording, the idea is to get every drum with a “close” mic, and also to get room mics. This gives you options later to increase a certain drum or treatment of an individual drum without affecting the other mics too much.

You can blend in room mics or “dry up” (i.e. very little ambience) the sound. In Part 3, I’m going to give you a starting point, the basic setup that you will no doubt augment or change according to your needs, your room, your mic cabinet and your own tastes.