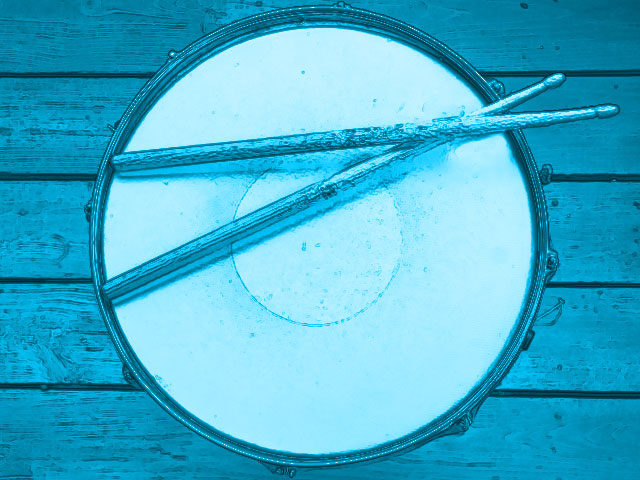 Learn the snare drum equalization in Part 5 of this series on EQ basics.

Any music producer will tell you they want to hear three things: vocals, kick, and snare. That said, it's important that you have a good snare sound that really punches through the mix... regardless of your genre. Whether you're talking classical, jazz, pop-rock, metal, you'll find the best records have captured an appropriate snare sound that drives the songs forward. A good snare tone can capture undiscovered musical elements existent within the arrangement (think Steve Gadd on any number of Paul Simon tracks). A bad one can make your drummer look more amateur than he really is.

For starters, get your tuning pegs tightened and tuned to where the drummer likes them (and where your sound is adequate). When you get your sounds, be sure to test hit various parts of the head. There can be several fundamental frequencies in a snare drum due to the idiosyncrasies in their design, the reactivity of the snares, the pressure of the pegs on the heads, etc. It is important to take these into account, especially if the parts call for different types of attack, or your drummer is inconsistent in his playing spot.

Mic-wise, it's common to stick a SM-57 right near the edge of the top head, a few centimeters to an inch above, and be done with it. This oftentimes doesn't sound half bad. But give yourself some options. The bottom head also sometimes sounds good, and recording both may be helpful. Also think about also getting a small diaphragm condenser in there. Something like AKG's 451B or 452 is a nice, compact solution very suitable for the cramped environment a snare on a drum kit is in. This mic is going to pick up much more of the mid-high to high frequencies that will help give your sound that crispness to set it apart from the other drums. Your SM-57 is going to highlight much of the low mids that will complement the rest of the kit. The overhead drum mics are ultimately going to pick up a significant amount of level as well, but ultimately your close mics are going to define your sound. A mix of both should get your sound where it needs to be.

When mixing, there are a few frequency areas that are good to look at, but there's a lot of subjectivity involved. A hard high pass filter under 120 Hz or so is a good start, while a semi-gradual low pass up about 15 kHz should also help. You should also look at cutting frequency areas before you start boosting things, so some good fundamental areas to try are around 400 Hz, 800 Hz, and a little above 1 kHz. A lift up higher than 9-10 kHz may be nice to brighten things up if necessary. Just be wary of the lead vocals.

All said and done, it's important to give the snare a frequency home of its own. If it overwhelms anything else in the mix, it can be incredibly piercing. If it is taken over by other instruments in the mix, it can make the song sound very flat, and likely boring. Ultimately our job as engineers is to make the most out of a player's positive attributes, and minimize their inconsistencies. The snare is a volatile instrument, and no player is better than the sound you mutually create.