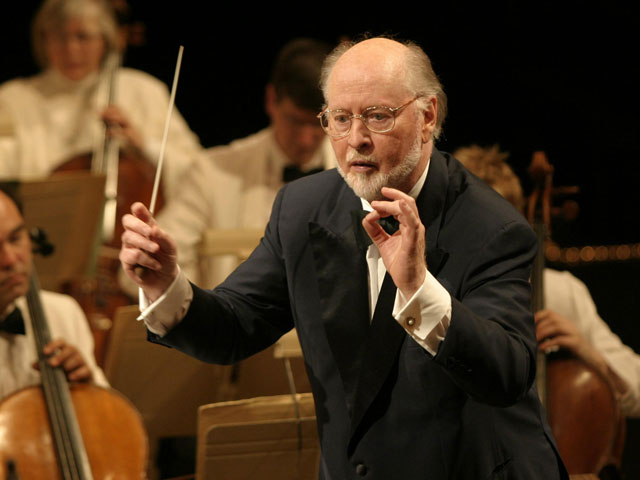 The original music created for our favorite films becomes part of our culture, transcending language and communicating on the most fundamental levels. Zoey Francis takes us on a tour of the best and brightest through history.

Movies are a completely subjective experience. This is true of any art form. An audience can watch the same film, and then walk away with different opinions, insights and varied levels of enjoyment. We each bring our own expectations, and everything that we see and hear in a movie is filtered through our unique scope of experience.

The majority of people who fall in love with movies do so because of the visual spectacle. This shouldn't be surprising, given that sixty percent of the population are visually oriented and seek activities that stimulate the sense of sight. For me, the auditory experience of watching a film is just as important as the visual aspect of it; perhaps even more. I recall my introduction to American cinema at the age of six; I didn't speak a word of English. But the music and sound effects from epic movies such as 'Superman' and 'Jaws', thrilled me to no end. And I've been addicted ever since.

Many of us who appreciate cinema for its achievements can comprehend the importance of musical scores. We develop not only a deep fondness and respect for the music, but also for the gifted composers who create such grand works of art. Some of these compositions are tremendous contributions to a film for three reasons: The music becomes a permanent part of your memory because it resonates on a personal level; as soon as you hear it, you long to watch the movie again; and because of that particular music, the film has succeeded in a way that it wouldn't have otherwise.

Listed below are thirty composers who are legends in their own right, with a spotlight on my personal favorite, John Williams. Please enjoy their music, along with a brief history about their backgrounds. 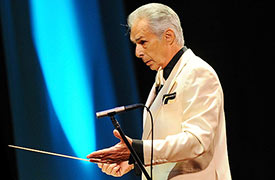 Awards: An Oscar for 'The Right Stuff' in 1984. Nominated for two other Oscars, as well as Golden Globes, multiple Emmys, and a Grammy.

Awards: Two Oscars, a Golden Globe & a Grammy for 'Titanic'. Also, Grammys for 'An American Tail' and 'Glory'. Nominated for eight other Oscars, as well as BAFTAs and Golden Globes. 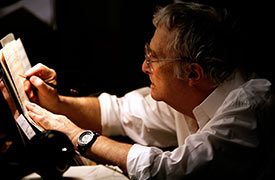 Awards: An Oscar for 'Emma' in 1997. Nominated for two other Oscars, as well as BAFTAs, Grammys, Emmys, and a Golden Globe. 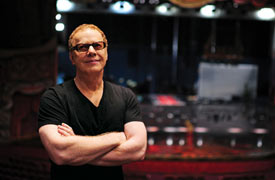 Awards: A Grammy for 'Batman' in 1990. Nominated for four Oscars, as well as BAFTAs, Golden Globes, and numerous Grammys.

Awards: An Oscar, BAFTA, Golden Globe and Grammy for 'Up'. Also a Grammy for 'Ratatouille' in 2008. Nominated for a second Oscar, as well as Emmys and Grammys.

A powerhouse of a composer, Jerry Goldsmith effortlessly crossed genres and scored for film and television.

Awards: An Oscar for 'The Omen' in 1977. Nominated for seventeen other Oscars, as well as BAFTAs, Grammys, Emmys, a Palm d'Or, and multiple Golden Globes.

Awards: A Grammy for 'The Dark Knight' in 2009. Nominated for 8 Oscars, as well as Golden Globes, Grammys and Emmys.

Awards: A BAFTA and a Grammy for 'The King's Speech'. A Golden Globe for 'The Painted Veil' in 2007. Nominated for 4 Oscars, BAFTAs, Grammys, and several Golden Globes. 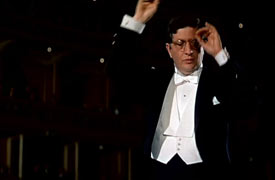 Awards: An Oscar for 'The Devil and Daniel Webster' in 1942; also nominated for 'Citizen Kane', 'Anna and the King of Siam', 'Obsession' and 'Taxi Driver'. A posthumous BAFTA for 'Taxi Driver' in 1977.

Awards: AFI for 'The Piano' in 1993. Nominated for BAFTAs, Golden Globes, and a Cesar (France).

Awards: A Grammy for 'The Polar Express' in 2006. Nominated for numerous Oscars, Golden Globes and Grammys.

Awards: Honorary Oscar in 2007. BAFTAs for 'Days of Heaven', 'Once Upon a Time in America', 'The Mission', 'The Untouchables' and 'Cinema Paradiso'. Golden Globes for 'The Mission' and 'The Legend of 1900'. A Grammy for 'The Untouchables' in 1988. Career Achievement Honors from ASCAP, European Film Awards, Fantafestival, L.A. Film Critics Association, National Board of Review, and Venice Film Festival.

A talented film composer, Jack Nitzsche was also a successful songwriter, arranger and producer who worked with the Rolling Stones, Sonny Bono, Neil Young and many others.

Awards: An Oscar, BAFTA and Golden Globe for 'An Officer and a Gentleman'. Nominated for two other Oscars, as well as BAFTAs, a Golden Globe, and an Emmy. 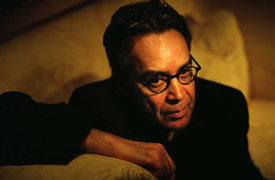 Awards: Honors for the Hollywood Film Festival and the L.A. Film Critics Association Awards. Nominated for five Oscars, along with a BAFTA, Grammys, and numerous Emmys. 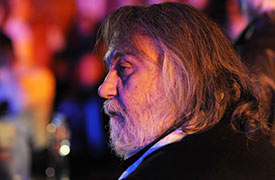 Awards: An Oscar for 'Chariots of Fire' in 1982. Nominated for BAFTAs, Golden Globes, Honors at the Ghent International Film Festival and the RTL Golden Lion Awards.

Awards: An Oscar for 'Thoroughly Modern Millie' in 1968. Golden Globes for 'To Kill a Mockingbird' and 'Hawaii'. L.A. Film Critics Association Honors for Career Achievement and 'Far From Heaven'. Nominated for thirteen Oscars, as well as several Golden Globes, Grammys, and an Emmy.

A frequent collaborator with David Lean, Maurice Jarre's compositions were often beautiful and haunting, long remembered after seeing the film for the first time. 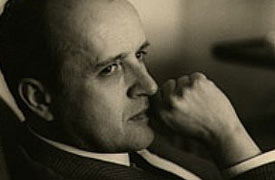 Nino Rota was an extremely prolific and inspired composer of international films, writing more than 150 scores over 46 years.

Awards: An Oscar for 'The Milagro Beanfield War' in 1989. Grammys for 'The Graduate' and 'The Fabulous Baker Boys'. Nominations for seven Oscars, as well as BAFTAs, Golden Globes, an Emmy, and multiple Grammys.

Awards: ASCAP Honors for 'Cliffhanger' and 'Notting Hill'. Nominations for BAFTAs, Golden Globes, and an Emmy. 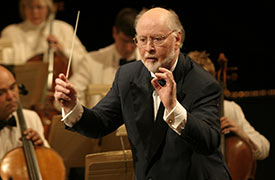 John Towner Williams was born on February 8, 1932 in Long Island, New York. He developed a love for music while very young, as his father was a jazz percussionist for the Raymond Scott Quintet and CBS Radio. The piano was his instrument of choice and by age 15, he had the goal of becoming a concert pianist. At 19 years, he premiered a sonata, his very first musical composition.

Early on in his career, he orchestrated for Franz Waxman, Dimitri Tiomkin, Alfred and Lionel Newman as well as other Golden Age composers. He became close friends with colleagues, Bernard Herrmann and Jerry Goldsmith. During the 1960's, Williams composed music for television shows which included 'Gilligan's Island', 'Lost in Space', and 'Land of the Giants'. During the 1970's, he scored music for disaster films such as 'The Towering Inferno', 'Earthquake', and 'The Poseidon Adventure'.

In 1974, Steven Spielberg approached the gifted musician to compose music for his first feature film, 'The Sugarland Express'. This would be the start of an enduring and personal partnership, one of the most successful in American film history. Their collaborative efforts span a total of 38 years, with 'Lincoln' marking their 26th movie together. (Williams has scored all of Spielberg's films, with the exception of 'Duel' and 'The Color Purple'.)

As a result of their partnership, Spielberg recommended Williams to his friend and fellow filmmaker, George Lucas. Since then, Williams has scored all six of the films in the 'Star Wars' franchise. He also composed the music for 'Superman', 'Dracula', 'Home Alone', 'Catch Me If You Can', the first three Harry Potter films and many others, with a total of 136 compositions so far.

In a career that spans six decades, John Williams has garnered tremendous accolades for his contribution to music and movies. He's won five Academy Awards, and was nominated 47 times in all, the most for any living artist and only second to Walt Disney. He's also won four Golden Globes, seven BAFTAs, five Emmys, and 21 grammys. He was inducted into the Hollywood Bowl of Fame in 2000, received the Olympic Order (the International Olympic Committee's highest honor) in 2003, and was a recipient of the 2009 National Medal of Arts from the White House.

Several years ago, I had the privilege and honor of seeing John Williams conduct his greatest cinematic scores at the Hollywood Bowl. It was an evening that I'll never forget, and a childhood dream come true. If there's any one person responsible for my enduring love and appreciation of films, it would have to be Mr. Williams. He's inspired countless people, and brought a profound sense of joy, adventure, and wonderment to our lives.