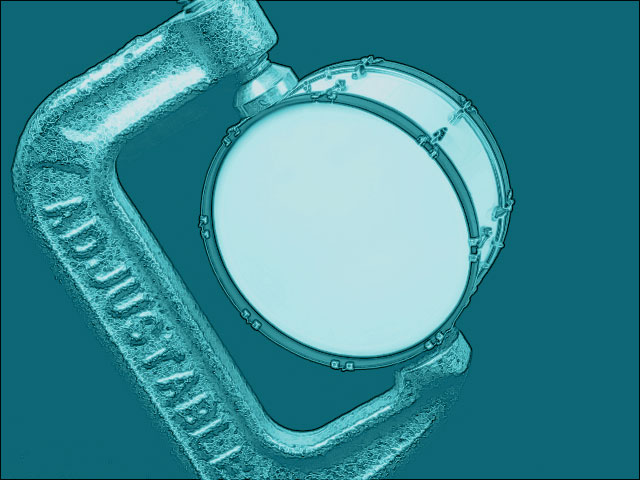 Getting started with your drum mix means knowing the basics. Part 1 of this series kicks off the party with thoughts on getting your tracks in phase and applying compression (just a little).

So you’ve recorded drums with multiple mic’s (close and ambient) and it’s time to mix them. There are too many variables to give you exactly what you should be doing or going for on what you’ve tracked, so I’ll go with the big generalizations to get you in the ballpark and then you can add, subtract, pummel or lightly touch according to you own tastes.

Here’s the down and dirty on what comes next:

If you recorded the kick with more than one mic, solo all kick mics. Most recording programs have a phase button on each channel so double check the phasing between mics by hitting the phase button, one channel at a time, for each mic.

The sound will get bigger with lots more low end if all mics are in phase with each other – which could mean one mic might need to have its phase reversed. If you have recorded the snare with two mics, solo only those two mics and repeat the procedure you just did with the kick.

Now mute every mic other than the kick and snare mics. Make sure they are in phase together. Next go through the rest of the mics on the kit by unmuting one mic at a time. If the phase isn’t cool, no amount of EQ can make up the difference.

If you have recorded the kick with multiple mics, you want to bus (send/route) those mics to a “bus” or “group”. This sends those mics to one channel. You can control how much of each mic is sent to the bus/group” by each mic’s individual fader.

Now you can EQ and compress the “summed” mics by that bus/group” channel. Bus/Group should be a mono channel which means you can use mono EQ/compression rather than the stereo versions of those plug-ins (helps save some processor power).

If your audio software doesn’t have mono bus/group, just make sure the individual kick mics are all panned center.

...and some compression, please.

So you’ve bus’d all kick mics to a mono bus. Slap (insert) a mono compressor on the bus/group channel and set the compressor to a slow attack, fast release, 4:1 ratio, and only dip into compression by -3 db, which means controlling the individual kick channels fader levels so that it doesn’t hit the compressor beyond a -3 db dip (which you’ll see by the meters on the compressor). Some hits might not move the needle, other big hits might dip in -5 db. But on the whole you just want to tame and give consistency to the overall track.